We always do two Thanksgivings in my family. One on the actual Thursday with my dad’s side and the other on what is dubbed Thanksgiving Saturday, which finds us celebrating with my mom’s side. I was off the hook for cooking on Thursday, as my uncle had it all buttoned up in the kitchen. Dave and I donated wine to the cause, because that is always useful.

Saturday, however, I volunteered some desserts. So Friday was spent baking tasty recipes I had seen online or in my travels. I made Pumpkin-Chocolate Bars (saw that one one the TODAY Show one morning before work) and they were festive for the season but I really wanted a chocolate pie.

So I did what I always do when I need a recipe: I opened a google search window.

That’s when I stumbled upon a gem of a recipe for “Gundy’s Chocolate Pie” only, I wanted an oreo crust. Luckily for me, Katie, of Chaos in the Kitchen had a recipe for that too:
Oreo Cookie Pie Crust
Yield: one 9-inch pie crust
prep 10 min, cook 10 min

Directions:
Preheat oven to 350°F.
Place Oreos in a large plastic zip top bag and smash the heck out of them. A flat mallet or rolling pin works great. You could probably also use a food processor (yep, that’s what I did–worked well, too). Try to get Oreos to a consistent crumby mush. The filling should resemble moist crumbs (if you do this by hand there will be a few larger pieces in the mix, this is fine). Empty crumbs into a mixing bowl and stir in melted butter until well combined. Pat wet crumbs all over and up sides of pie dish, making an even surface. Bake crust for 8-10 minutes or until hardened. Cool before filling.

So, I had my pie crust (chilling in the freezer after baking, actually) and I began working on the chocolate pie.
(adapted from Chaos in the Kitchen)

Directions:
Combine milk, egg yolks, sugar, salt, flour, and cocoa in a cold saucepan (literally put it in the freezer for a bit). Stir thoroughly to combine. Turn heat to medium, stir constantly until thick but do not boil. Once thick, remove from heat, stir in butter and vanilla. Let mixture cool slightly and pour into baked pie shell. Chill.

So. simply enough, right? Yea. Not so much if you’re impatient like me. See that part above where it says “once thick”? Yea. Get it thick. If you don’t and you’re too impatient, your pie will look like this: 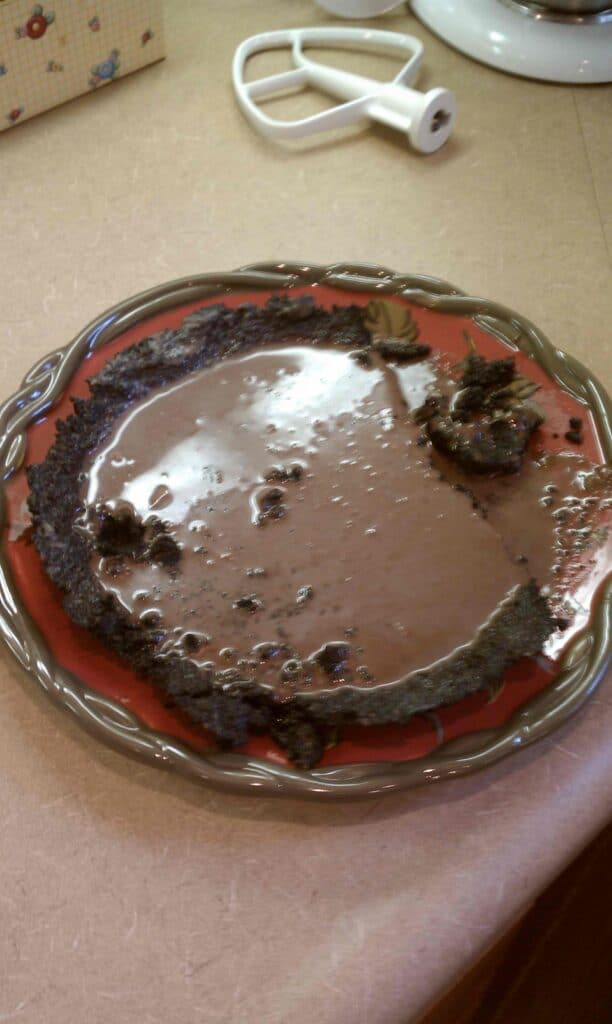 Which is problematic when you have to be somewhere that afternoon with said pie. On the plus side, the crust was tasty (which is why the right side is hacked off…I didn’t screw that part up, thankfully!)

So I went around again for round 2, with Dave running to the store for more eggs for me. The second time around (after many calls to Dave to come look at it and tell me what he thinks of the consistency) we had a winning pie: 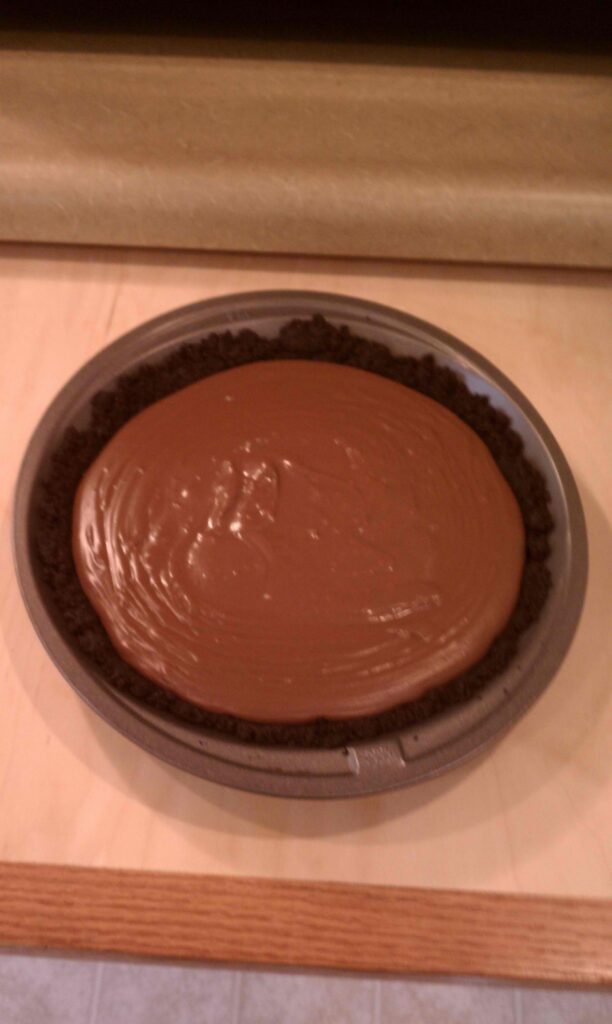 I whipped up some whipped cream (literally) and put it in a tupperware to take with us and thus, the Thanksgiving pie was saved.