I was excited for the Philadelphia component of my trip. I think by now it’s common knowledge that I always enjoy when I can combine a baseball stadium trip and a Mets road series, so the fact that these two things lined up to coincide makes the trip more fun for me. 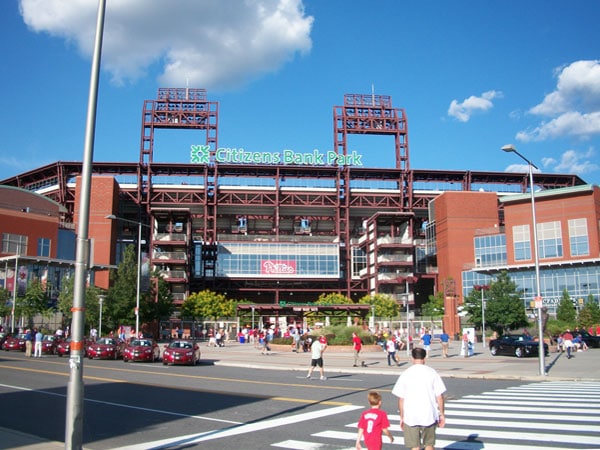 I hopped a subway to the stadium, which is essentially situated in a “sports complex” with other professional stadiums and venues scattered nearby, walking distance from one another and all reachable by a single subway stop. I always feel very big city when navigating the subway. I usually bring my iPod to pass the time, furthering my attempt to not stand out as a solo female traveler. For baseball games, it’s usually easy to find my way to the proper stop. I just follow the mom or dad toting their kids who are donning t-shirts with the home team logo prominently displayed.

Upon arriving to the stadium, I noticed how there seemed to be ample parking why, one would drive to a game accessible by subway (read: a method of transit in which someone else drives) is beyond me. But the stadium(s) is the only thing around. There is a bar that is adjacent to the ticket office, which seems to be the best only “pre-game” spot, and they made it count; it was seemingly packed.

I wandered up to the ticket counter and asked for the best available, winding up with tickets in the upper Lower Box, which means that I was not right up in the section on the field but rather on the same level, just one section back. My seats were shaded just to the third base side of the dish. Not too shabby. 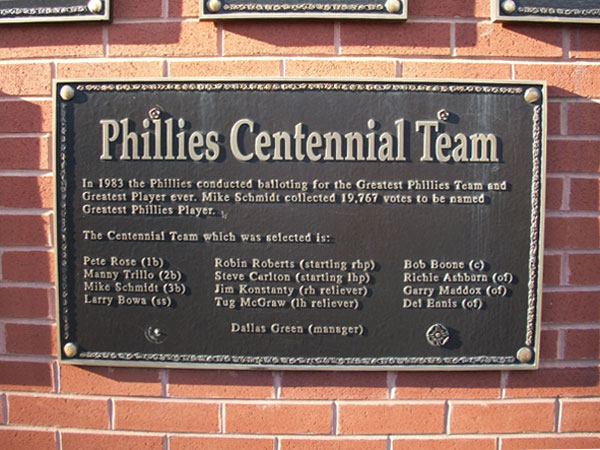 As seen in the Hall of Fame area

Of course, I got there early enough to watch batting practice, per usual. I noticed Mookie Wilson throws a decent BP and if I had my way, I’d prefer his tosses, with most of them opportunities for the guys to get loose, not having to take too many pitches in the dirt, up out, etc.

While they prepped the field, I did a quick tour. My New York Times food guide suggested a pork and provolone sandwich with broccoli rabe from Tony Luke’s so I staked out where I might be able to obtain what would ultimately be my dinner. As I walked around, I immediately noticed the great site lines. The wide open breezeways were full of fans. (Points for their passion, btw. Even the standing room only tickets were sold out and I could tell. The stands were barely dotted with empty navy blue chairbacks.)

They had plenty of space to walk between the seats and the concession stands and I made it my first mission to find Mike Schmidt memorabilia for someone at work who had asked that I take a look around. It was nice to see the throw back merchandise counter, with signed bats, balls, jerseys and the like. They even came with certificates of authenticity. I liked the nod Citizens Bank Park took to their history. They had a Hall of Fame area in center field, a smaller area that chronicled the Phillies history as a franchise that also included Hall of Fame plaques for anyone inducted or who had a jersey number retired. 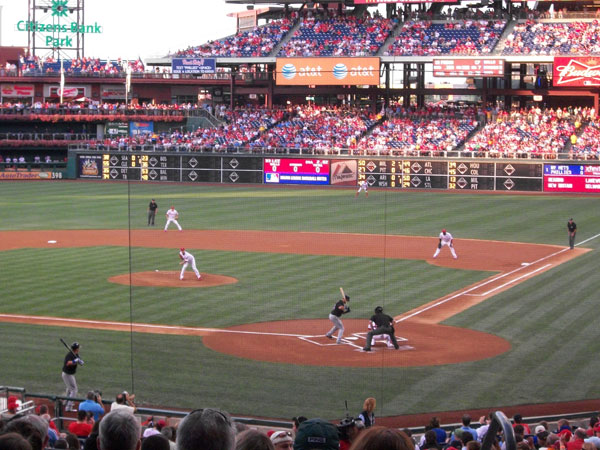 The weather was perfect at the yard, making the atmosphere even better (if you’re a Phillies fan–the Mets lost both games I saw….wasn’t pretty.) The whole stadium had great site lines and no obstruction behind home plate, which earns major points with me. The fact that it’s a Coca-Cola stadium is also a plus.

The concession stands offered an assortment of foods that were (to me) unique the the ballpark, which was good. The other food recommendation I had received was to try the fries from Chickie’s and Pete’s. My plan was to seek these out on night number two and while the attempt was in fact made, it wasn’t quite how I planned it going down.

To make a long story short, I happened to save a runaway hotdog for this very nice family in my row and they had some of the fries. They offered me some to try when they heard that I hadn’t had them before and they weren’t bad. They were like crinkle cut fries with some old bay seasoning so I decided to get my own around the 6th inning. That was poor planning on my part because apparently they are the thing to get the line at the only location in center field wound not just through the turn styles, but around to right-center field. I only had three innings and I didn’t want to spend them in line, so I passed.

Overall, Philadelphia is a nice yard, it’s got a lot going for it, which is why it earned a 7.5, but after the game, there’s no where to really go. Everyone filters back to their post-baseball world and there didn’t seem to be an outside atmosphere, which I have always liked. Still, it was a good place to visit and I’m glad I got two games in while I was there.