I (kinda) had my first Napa visitors this past weekend. I say kinda because a couple friends of my dad came last weekend so I guess that kinda counts because I took them to do tourist-y things but it was not planned until they actually arrived in the Boot.

Anyway, back to the matter at hand. My mom, my aunt and two of my good friends came to visit and this was planned way back in December when I was home so I consider them my first Cali visitors. Little did I know that the weekend before Mardi Gras is just as insane with parades. I had no idea. If this “pre-Mardi Gras weekend” is this crazy, I’m outright scared for Mardi Gras! Which doesn’t really matter because we have a four-game home stand so really, I will be practically sleeping in the press box.

But this weekend we did LOTS of stuff. I should take a moment to let everyone know that I make a mean itinerary. As in, I’m very hardcore about planning. I can’t help it. A couple years of Build a Better Burger will do that to a girl. And I learned from the best event planner ever, so needless to say, there was a lot on the agenda.

After a very hectic travel day in which LAX let me down (shock) by not having their planes take off on time, in turn making my lady crew’s connection in Houston late, and therefor eliminating the chance to see my place of employment and meeting my coworkers, the girls finally arrived.

We all got cleaned up and after a short tour of a part of the city that was definitely NOT on the agenda, we found our way to Impastato’s in Metairie (a suburb of New Orleans). It was delicious probably the best meal we ate. It did not hurt that Mr. Joe gave us all roses. I like roses. Roses don’t make me sneeze and I felt fancy. Thus, the following prom-esque picture was taken. 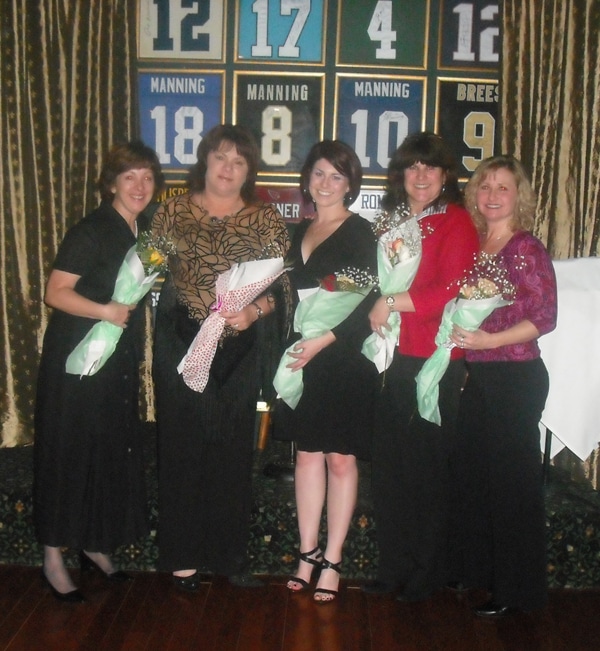 This reminds me of prom minus boys

By the time I got home, it was close to midnight and I was exhausted and full. I think we had six courses. No joke. It reminded me of the gourmet dinner the football coaches and by football coaches I mean their wives made us a couple years ago…wine was flowing and food just kept coming. When we heard the desserts, we each took one and rotated to the right so we could all enjoy them. And enjoy them we did. Though I don’t know how we fit it all in. I was impressed with my eating efforts that night.

On Friday (the 13th) we took a VooDoo Cemetery tour and our guide was very informative. His name was Ernie and he was a wealth of New Orleans knowledge. He is also good at calling you out for removing yourself from the group to talk on your cell phone while he is explaining the meaning behind neutral ground and he doesn’t care that you might be talking to your boss.

As we were talking back from the tour, we were on a side street in the quarter, trying to figure out our next move when all of a sudden, I stop dead in my tracks and shout in a very Ann-Hathaway-just-finds-out-she’s-a-princess sorta way, ‘shut up‘ and promptly scurry up to the next doorway ahead of me.

Wanna know who was standing inside of it?

My old boss from the winery and the winery chef, who I had spent a great deal of time with one summer doing a tour.

Crazy, right? I know. I was shocked. My mom took a pic of me with the two, because B-Dub was dressed in costume as the Grand Marshall of the Krewe of Corks parade that was taking place later that day. Hilariously awesome. Also, Mom, that is your cue to upload your pictures to the computer. Then send them to me. Or I will tell you how to add them to Shutterfly. It’s easy. Just don’t leave them on the camera. Thank you.

After our run in, we figured we needed to eat again, despite having sworn off food for weeks after the delicious-yet-filling dinner we’d had the night before. For lunch, I took the group to Central Grocery for muffalettas, which were a quick favorite and I can’t blame them for appreciating deliciousness.

In the afternoon, we went on a plantation tour to Oak Alley, which was beautiful but was out in the boondocks. We cut through swamps and learned about the Cajuns. Word on the street is that they were the criminals, prostitutes and other outcasts from Europe who were not suitable for society so they were banished to the swamps, thus becoming known as the Cajuns. Not sure if that is accurate but we’ll go with it for now. 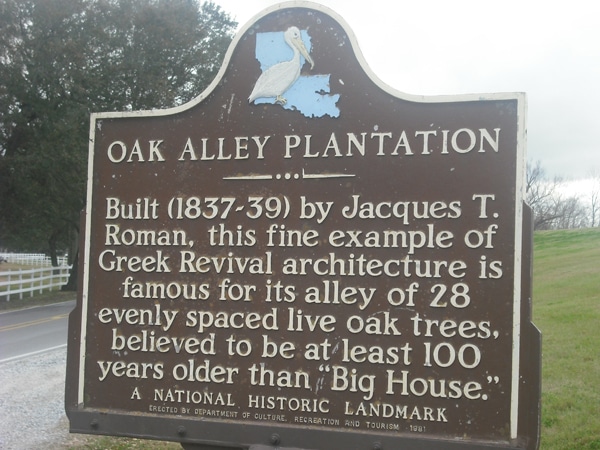 The story of Oak Alley 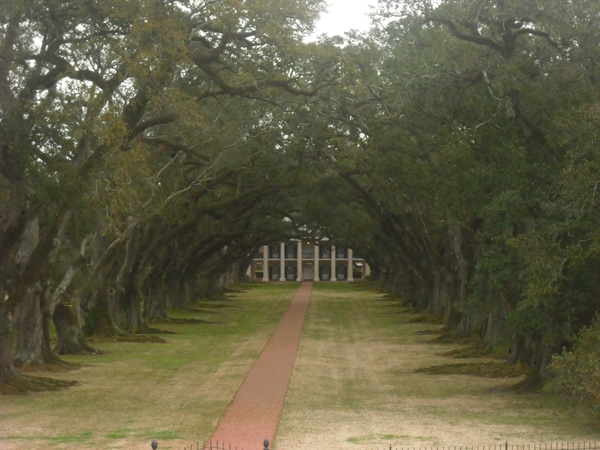 The oaks of Oak Alley

Then because we were in the sticks, the tour bus got caught in I-10/Pre-Mardi Gras Friday night traffic on the way back, which made me want to gouge my eyes out because we all know how I feel about traffic. And the two loud obnoxious men who kept trying to convince the driver to drop them off first didn’t help my cause. It was at this point that I reaffirmed my decision to not even get on I-10 to see Christ ride a bicycle.

FINALLY we got back to the hotel but because of parades, we ended up not doing dinner at Acme and the ladies had to forgo their first charbroiled oyster experience. We went to some place in the Quarter called Oceania or something and watching our very gay waiter get hit on by two very drunk women. Post-dinner, we went to Pat O’s to check out the Piano Bar, which I think was a good French Quarter experience for the group.

Check us out, having a night on the town (yes, I am wearing my Mets hat. It’s almost baseball season and need I remind everyone that I heart David Wright?): 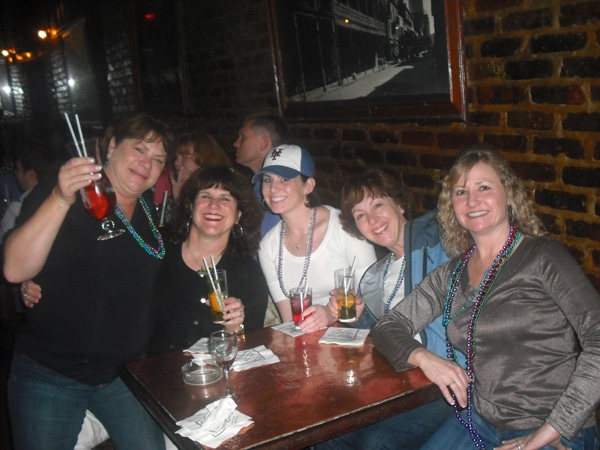 The ladies at the piano bar

On Saturday, we started the morning out right well, it was more like afternoon by the time our waiter brought them out to us with some beignets from Cafe Du Monde then spent the day walking around the French Market. I got the latest Janet Evanovich book for only two dollars. I literally LOL when I read her books so two dollars was a steal of a deal. I also got a charm for my charm bracelet, which is officially at capacity.

Post-shopping, I headed back to my house to get ready for our House of Blues concert. We went to see Corey Smith and I have to say, I was disappointed in the HOB as a venue. They had no chairs and no benches but it wasn’t exactly a dancing venue either so….standing was cool. In a Borat voice NOT!

Then there were annoying drunk girls who I wanted to slap because they kept prancing/stumbling around making idiots of themselves in front of the opening act band, who had planted themselves near our post.

I will go into my disappointment in the venue in another blog post but let’s just say that I will not be going back. It has to be someone I really want to see for me to deal with that crap again.

On Sunday, our last day before an early Monday AM flight, I had to go to baseball practice for a little bit and my mom and my aunt wanted to come visit Uptown instead of going on the swamp tour. I would have liked to have gone on a swamp tour but felt better when a member of the baseball team told me he and the guys would take me on my own personal swamp tour whenever I wanted. I trust them to not feed me to the alligators, since I have become a potential source of sunflower seeds, so I will take them up on it sometime.

After the swamp tour, we met at a restaurant for a quick lunch (mine consisted of bread pudding because I had a subway sandwich for brunch earlier) then we boarded the Steamboat Natchez for a paddleboat cruise on the Mississippi River. It was a very relaxing tour and I got some good pictures. It was very Disneyland without the sugarcoating. 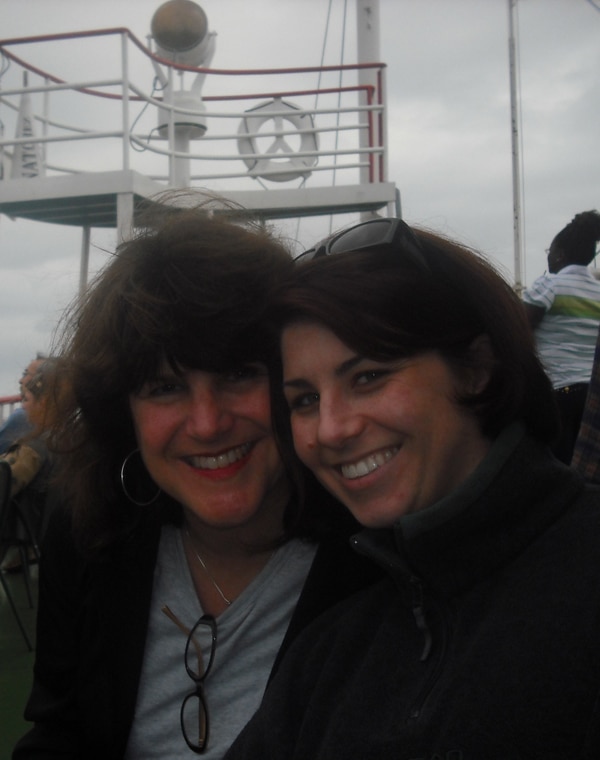 Mom and me on Steamboat Natchez 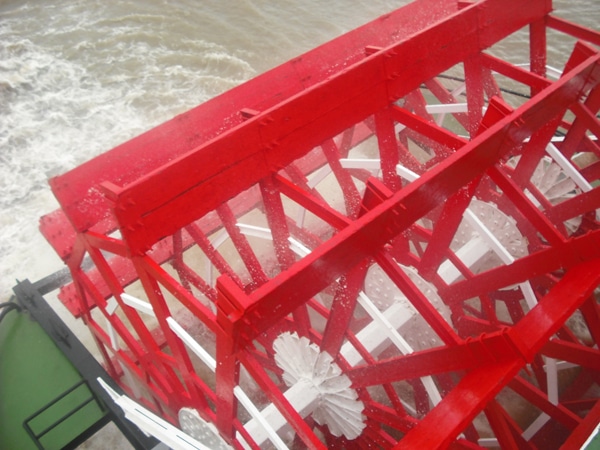 Confirmation that the boat was paddleboat powered

At one point, a fellow cruiser who had begun chatting us up agreed to ambush Cindy, who had passed on the cruise. I gave him my camera and he made a video, pretending to interview Cindy about her trip, without her knowing we had put him up to it. It was spectacular. We got her so good.

After the Natchez, we got cleaned up for dinner and ate at the Rib Room at the hotel. I naturally had a steak. We had some great wine and then headed to Bourbon for a quick photo op. I was so exhausted and knew I had a big week and they had an early flight so we literally made the trip to Bourbon, took a couple pics an then headed back.

It was a great visit but a whirlwind trip. I’m still catching up on sleep…which I need to do before Friday, which doubles as opening day for my baseball season.