I’m currently on my couch. This is a step up, from my bed, where I have been living for the past 3 days. Why would I live in my bed for 3 days? Oh, that’s easy. I have been fending off death. NBD*.

I have been bored out of my mind since Thursday, when I (and 20+ others who I see on a daily basis) fell ill.

On Wednesday night, I noticed my throat was kinda bugging me but I thought it was because I sleep with a fan on me and I was all dried out. I’m also convinced that my crappy apartment has some sort mold growing in the walls or something. Probably Chinese drywall. So Thursday I woke up and felt the same, I chalked it up to allergies and headed out to practice number one of our last two-a-day.

I made it through the practice, feeling slightly stiff, and I believe I happened to liken myself to a 86-year old woman at one point. Following getting my hair cut, which was cut way to short for my liking–ugh I headed back to work for practice number two. Prior to Practice #2, I headed down to the training room to see about getting something for my chest congestion. Upon entering the training room, there were lots of other people who must have felt like 86-year old women, because there was lots of temperature-taking and the filling out of paperwork. Upon hearing my symptoms, my temperature was also taken and registered as a stellar 101.0 degrees. Fail.

Fast-forward to when I went home early, feeling worse as the evening went on. My entire body ached. Joints that I didn’t know I had hurt. Looks like I shoulda paid attention to the email that circulated a few weeks ago about the cases of H1N1 (read: swine flu) that broke out in another part of campus.

Needless to say, Thursday night’s sleep wasn’t awesome. Friday afternoon I think my fever finally broke because I was sweating like I had just had the workout of my life. I was throwing off BTUs to the point where I got in my car and drove around with the air blowing on me for a while. Sure that my temperature must have been 109 or something, I was in awe when the thermometer beeped that it was only 98.2.

I did get a nice e-card from my office-mate. It was thoughtful. 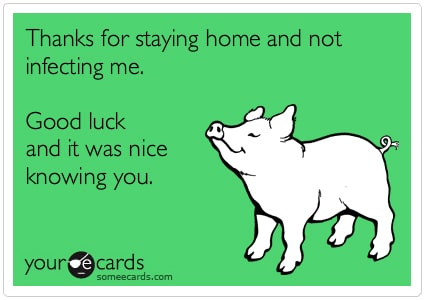 I began eating again on Friday, which was neat. I have consumed my weight in chicken noodle soup and am hoping to move onto heavier things shortly. I’m currently feeling exponentially better, although I don’t sound it. I still have a stuffy nose and a cough that would rival a chain smoker but I’m hanging in there.

So in conclusion, swine flu is NOT awesome.

Now I’m off to disinfect my entire house.

2 thoughts on “NOT an ideal weekend”