**UPDATE** In a shocking turn of events the weather has changed again. You can imagine my surprise when, after seeing bright sunshine out of my window, I was greeted with ridiculously cold air and 40-degree temps upon leaving the house this morning. No fake bundling for me.

While my western counterparts have been freezing their keisters off (sidenote: “keisters” is a word not used nearly enough as far as I’m concerned, and I’m bringing it back thanks to the movie Home Alone which I watched the other night and recalled how much I still enjoy the scene in which Kevin tells the pizza delivery kid to ‘keep the change ya filthy animal’.)

I, on the other hand, have been alternating between the air conditioner and the heater. And that’s considered normal according to the good-looking weather man on my local NBC station. Last weekend was frigid and we all got hyped up about potential flurries (they ended up hitting the north shore but not south of the lake, where I am) but this week has been all over.

After a torrential downpour and a classic southern storm that made it impossible for me to sleep until 3:30am on Monday night/Tuesday morning due to insane thunder, I woke up and chose to wear a scarf and boots in order to deal with lake-sized puddles that had formed in the night, only to find myself overheating halfway through the dang day.

At any rate, it hasn’t exactly felt like Christmas around here since it was about 70 Wednesday afternoon. I say this not to rub it in, since I know that it happened to be approximately 22 degrees when Joe drove to work in Napa the other morning, but mostly because I’m actually kinda bummed by it. Don’t get me wrong, I think we all know how I hate cold weather but I can deal with a cold December to get me in the spirit. Regardless of how mother nature was not complying with my request, I set aside last night as my baking night and I also took a few moments to take a few pictures of my (albeit sparse) Christmas decor, as I promised my mother: 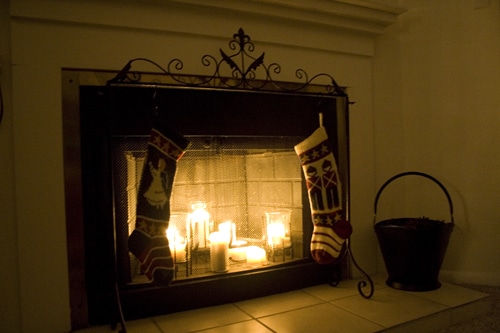 Now Mom, I know what you are going to say. You are going to tell me that what I should do is add some garland to my stocking hanger thing (a safe distance from the flames of the candles, of course) or perhaps frame my mantle with some instead? And while I’m at it, adorn them with some red and white checkered bows? Yes, I thought so, but this brings me back to another issue I have with no cold weather in December.

Part of the holiday experience is traipsing into a store after having battled the elements to get there. Friday night, I attempted to buy some sort of Christmas tree stand which would hold my little Colleen-sized tree and as I was walking into TJ Maxx (be proud, Mother) there was a lady coming out in shorts. Shorts. In December. And it wasn’t even odd. But this does not lend itself to holiday shopping in which I get to “shake off the cold” as I walk inside a store.

I forged ahead with my holiday baking and played Christmas tunes while giving thanks for my KitchenAid mixer Joe and Ted got me for Christmas a couple years ago. And while I had to turn the A/C on to cool down the house after using the oven, I did make delicious treats which I will be taking to the warehouse in order to bribe the guys into pulling my orders first on Christmas Eve because, according to Pillsbury, nothing says lovin’ like somethin’ from the oven. I was also inspired to dig up my spritz cookie gun and get to work on some mini green Christmas tree cookies. That might happen this weekend.

I opted for a new recipe last night and while it wasn’t exactly Christmas-y, it did come from my Better Homes and Gardens special edition magazine on Christmas baking so I say it counts. The recipe was for toffee crunch cookies and I was really hoping it would turn out like the cookies at a sandwich shop I go to sometimes called Heavenly Ham. They have the best heath bar cookies ever. Ever. So my task was large.

I’m not 100% satisfied with the results, but I also wouldn’t turn them down either, but I will be adjusting the recipe to use a little less flour in the next batch and then I will decide whether or not it’s a recipe worthy of posting. Here’s how they turned out anyway: 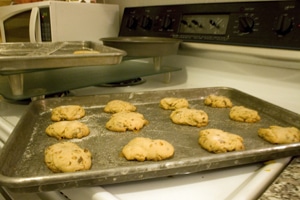 The evening did, however, put me in the Christmas spirit for a little while anyway, and I’ll work on the rest this weekend. Maybe I will bundle up and go shopping Sunday in which the high temperature is supposed to be 71 and fake like it’s 53 degrees just to get into the spirit. It’s not like that would be weird or anything.