My brother came to visit this weekend, partly to see me but his trip conveniently coincided with Mardi Gras!

He took a red-eye flight Wednesday night/Thursday morning, so I picked him up before work, gave him the grand tour of my place, handed him a pile of blankets and a pillow and told him there was lunch meat in the fridge and that I would be back later.

After work, we went to a local bar and snacked on some food while the Budweiser Girls asked if we wanted airbrush tattoos of a fleur-de-lis with the BudLite logo underneath. We passed, but Joe did manage to get some Mardi Gras beads with the BudLite logo on them for Bubba. We met up with B2 since I have not seen her in ages. We kept it low-key since I had to work the next day.

Joe got rested up on Friday before we headed downtown to meet up with John-John and his Marine buddies. We met them on Bourbon and headed to one of my accounts for a quick pizza before going to the balcony party on Bourbon.

The streets were crowded, but manageable as we made our way to the Royal Sonesta Hotel. After a quick stop at a daiquiri shop, where I turned down an offer from a daiquiri girl to take a shot from a test tube, we made it to the hotel. We flashed VIP passes to get in the door, because you know, that’s how we roll, and up to the balcony we went, where we all got to throw beads to the party-goers below and met up with a couple of my friends from work. We also took the time to snap a couple of pictures for the scrapbook, of course. 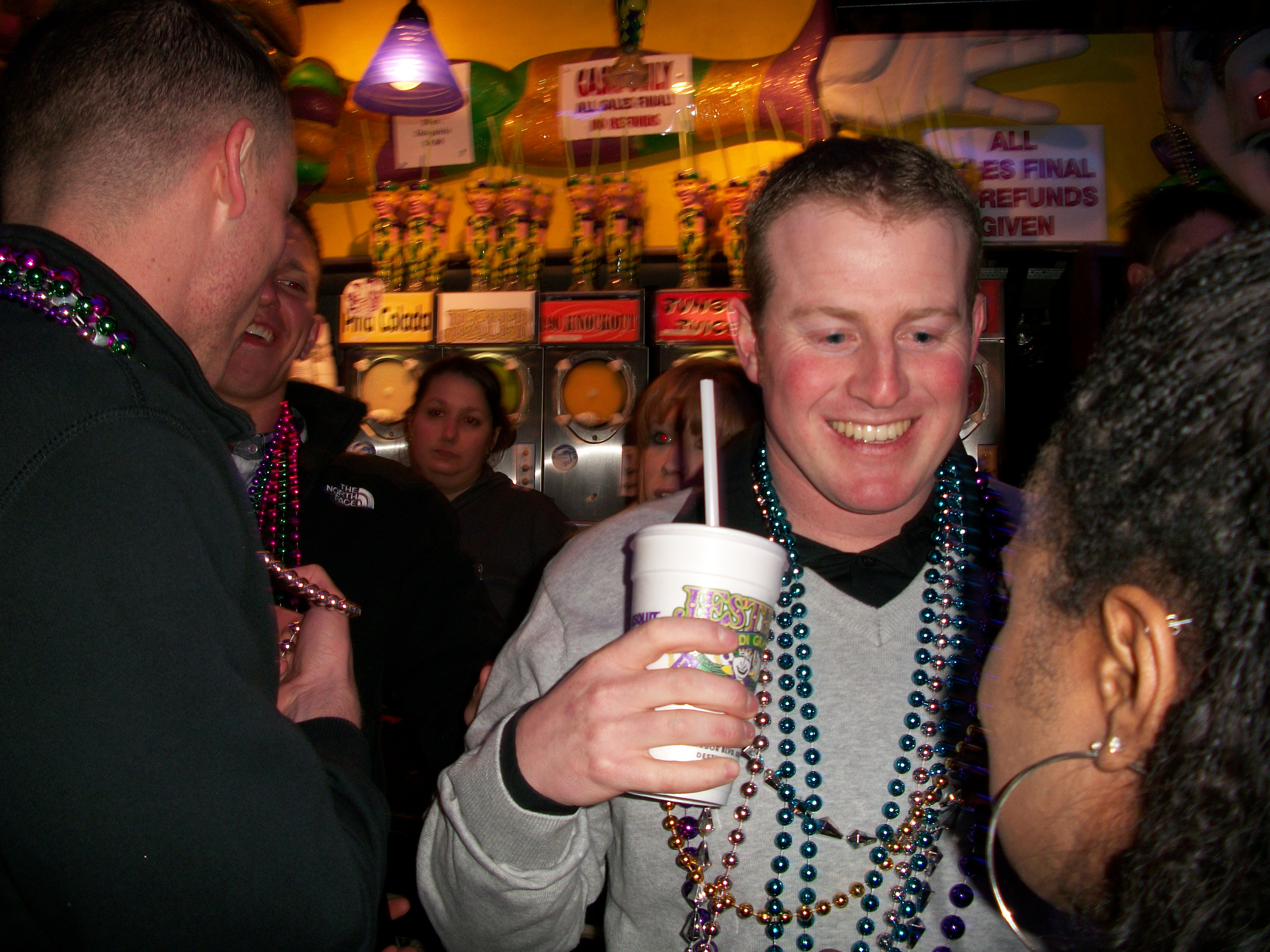 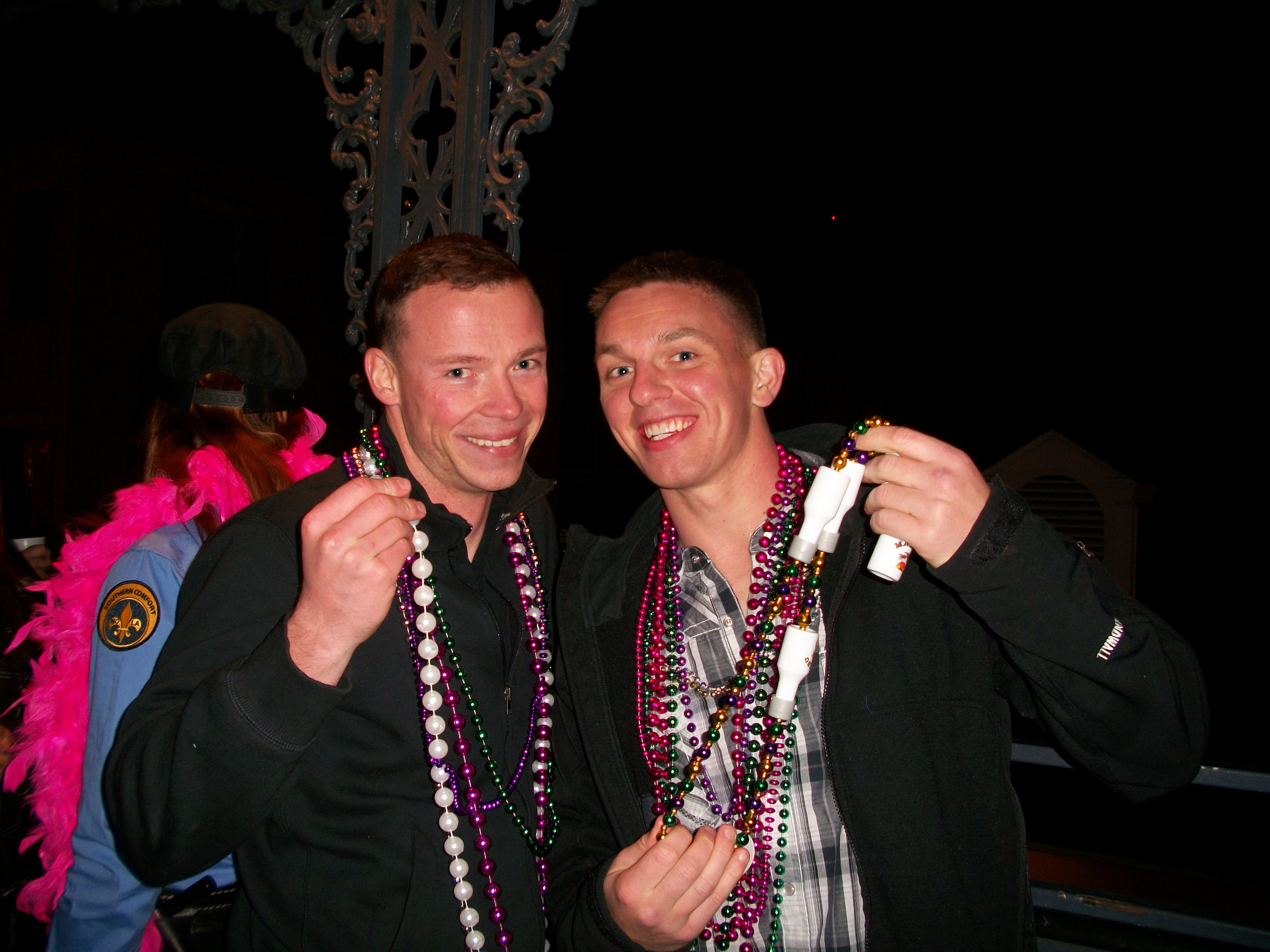 JJ and John-John in their bead glory 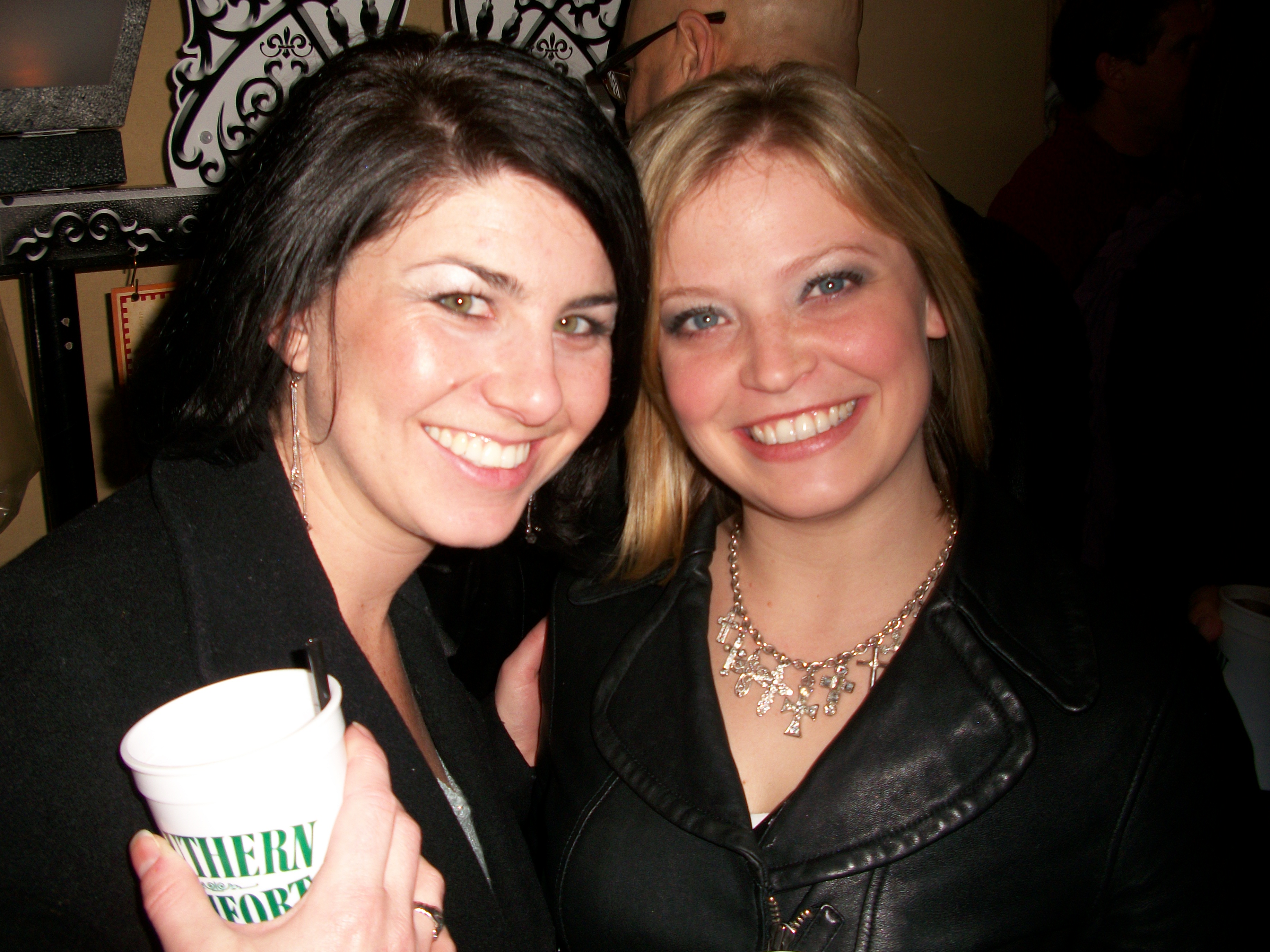 Me and Kristen on the balcony 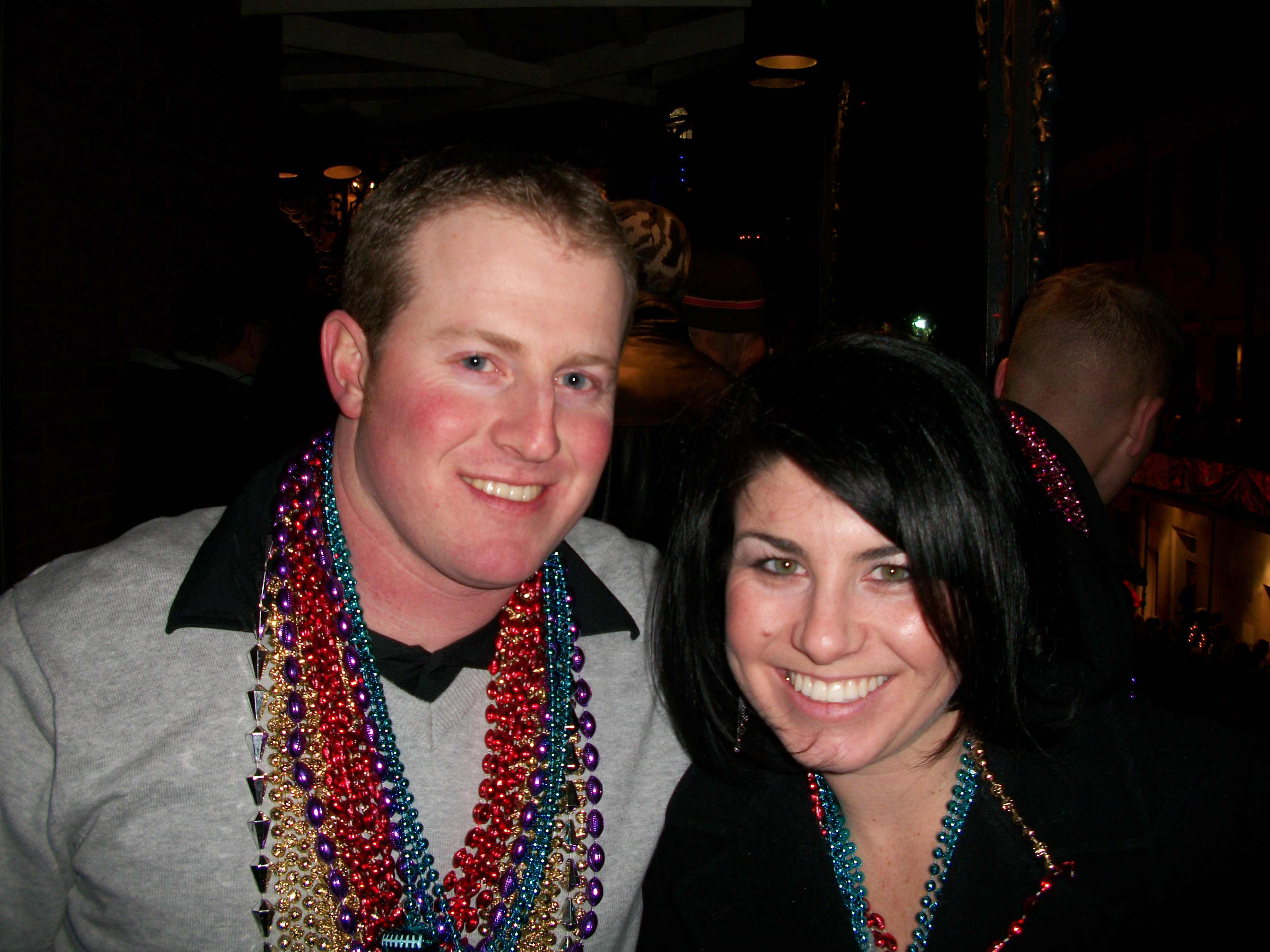 Joe and me on the balcony 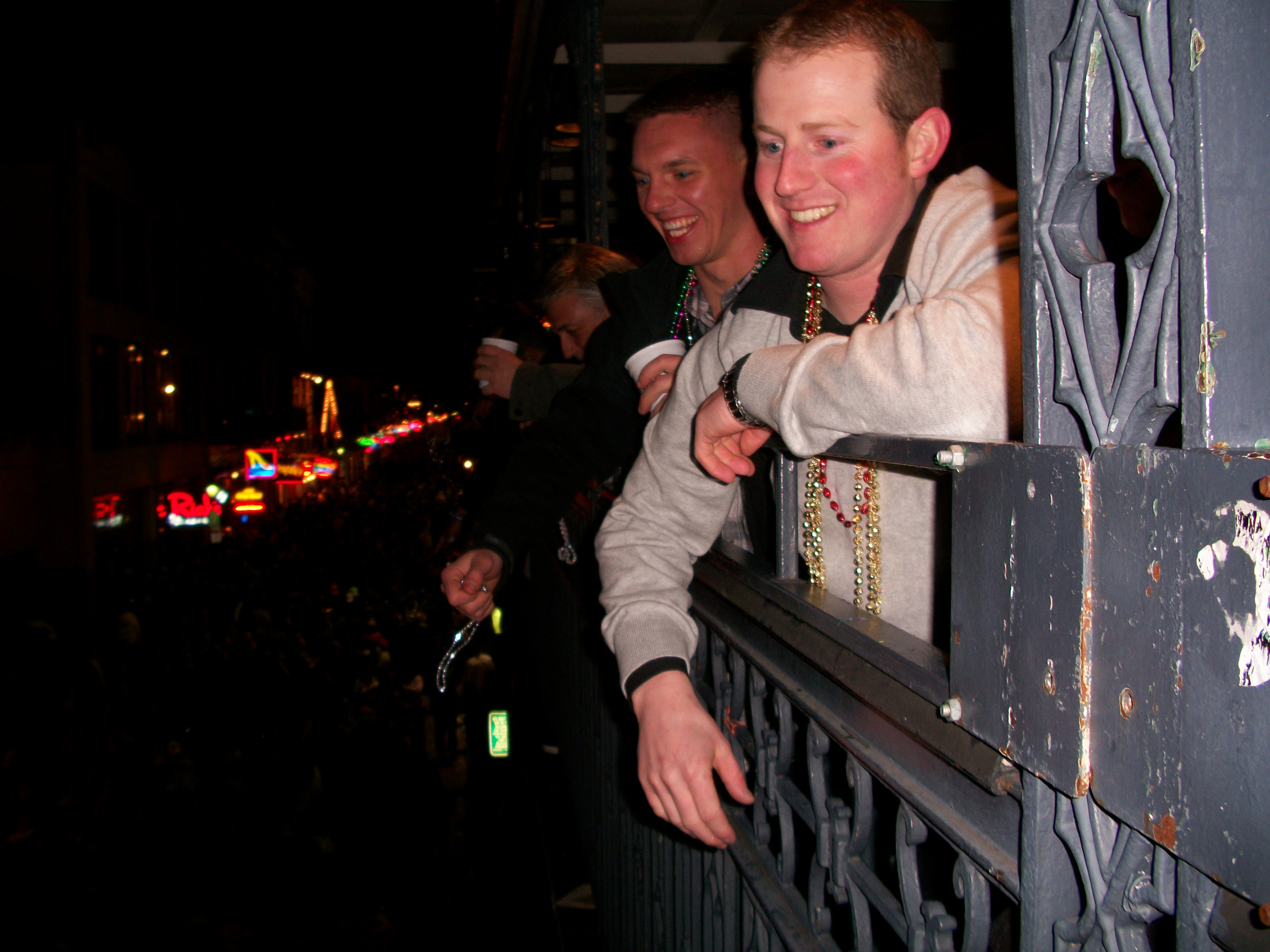 Somehow during the course of the night, Joe and I got separated, as he and the guys went off exploring. I met back up with him later and we headed home. We did, however, get to see just how the city deals with the ahem remnants of Mardi Gras. They literally bring in bulldozers to scoop up the garbage. No joke. We were driving down Canal at the intersection of Bourbon and it may or may not have been in the wee hours of the morning and we saw multiple bulldozers scooping up trash and dumping it into the garbage truck. Then we also got the pleasure of seeing them powerwash the streets with a horrific perfume-scented spray that proceeded to make me sneeze incessantly.

I was never so excited to go home. Plus, we needed to rest up for Saturday, which started off with a trip to a po’ boy shop for Linner (around 4pm). After Linner, we went back to my place to get cleaned up for Saturday festivities.

I would like to take a moment to describe the weather conditions as of late. In a word, freezing. Yet somehow, I thought it was necessary to wear cute going-out clothes and heels on Friday. That, I learned, was an epic fail. I quickly rectified that on Saturday when I wore my (f)UGGS and a long-sleeved t-shirt layered on top of another long-sleeved t-shirt and a coat over that. And one glove, thanks to Brooke, for my drinking hand. Hey, adult beverages over ice are cold! That was a much smarter route.

Saturday was also Endymion. That is the parade that was going on and we happened to arrive right as it was ending. That translates to hoards of people. We were all crowding onto Bourbon and it was the most atrocious experience of my life. Joe and I were ready to tun around and go home. My dad would have moo-ed like he was in a herd of cattle multiple times. It was THAT bad. We finally met up with John-John and the first words out of his mouth were in frustration. I believe it went something like “I have wanted to punch about 10 people in the last 10 minutes.”

We agreed. I personally had wanted to punch about 20 people, including the pint-size hooligan who thought howling at me would endear me to him. Really, he was the inspiration for the Pants on the Ground song, so odds weren’t in his favor.

As we headed back to the balcony party, I saw someone I worked with and we all rolled in together. I had never been so grateful to be above the madness. John-John ended up retiring for the evening early, but Joe and I lived it up on the balcony with all my work friends. Saturday was definitely a solid night.

In fact, (L-Boogie this is for you) Saturday was a top night….*top* night! (Side note, if you haven’t seen The Wedding Date, you totally should.) 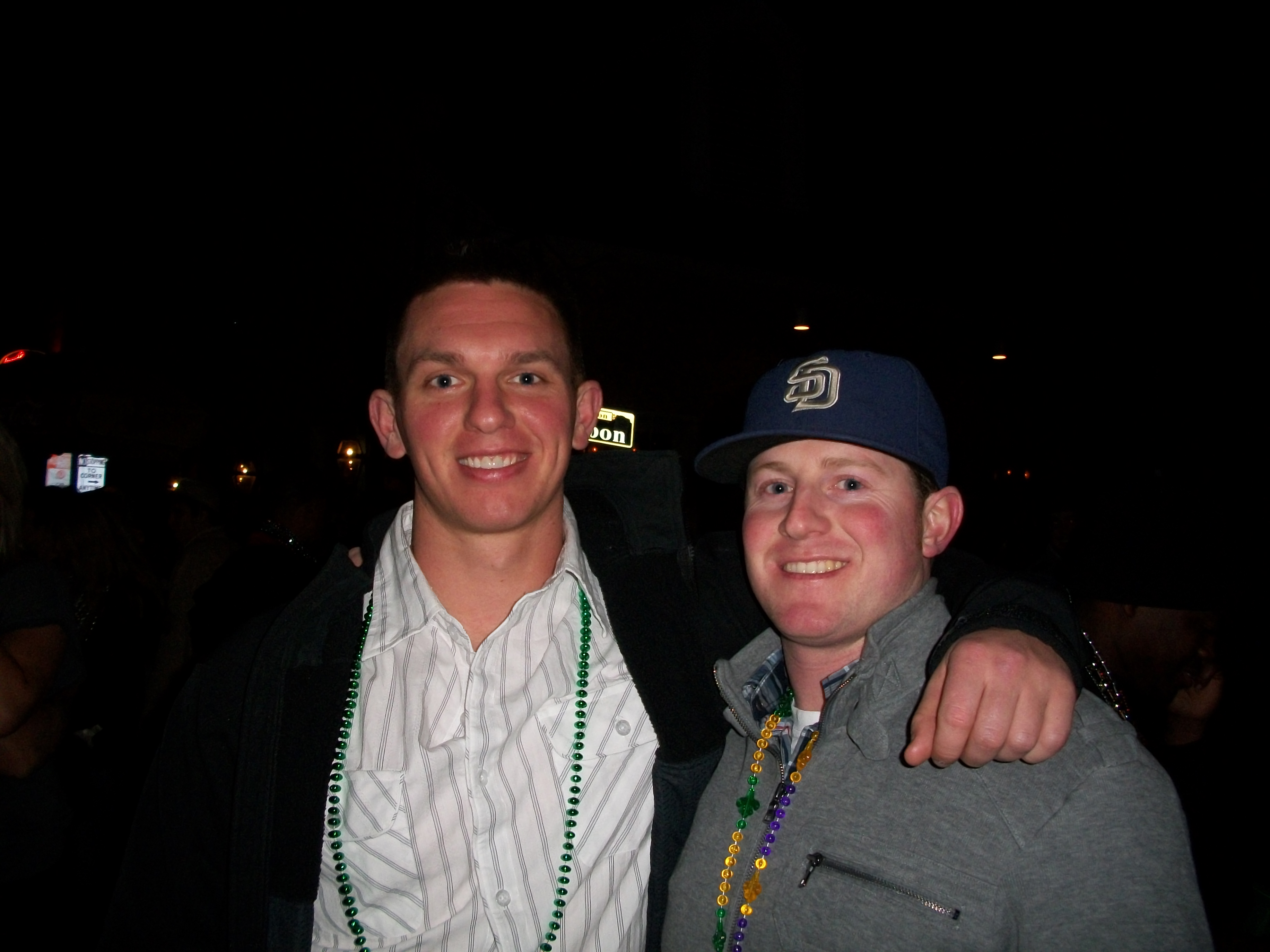 John-John and Joe on Night 2 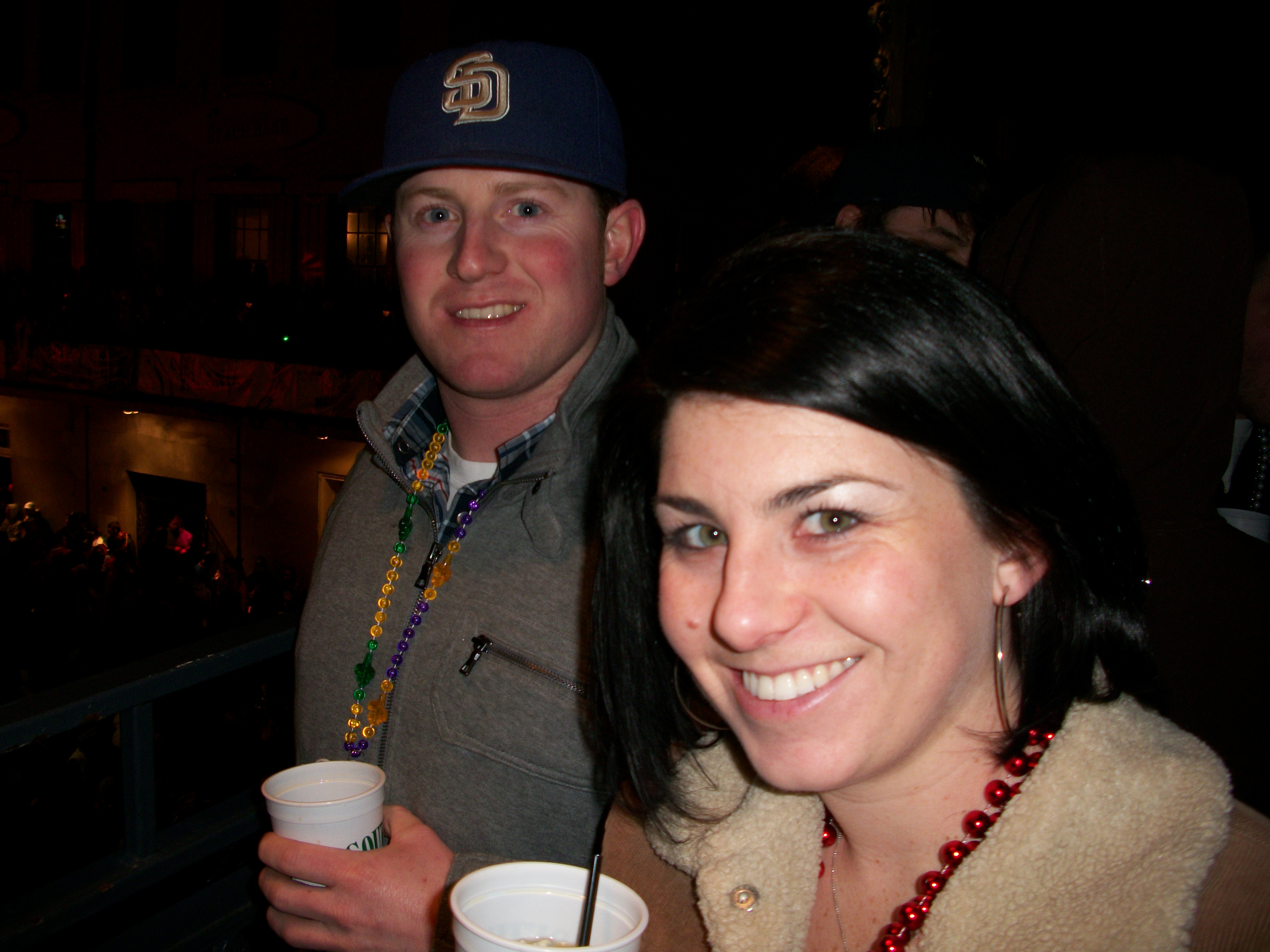 Joe and me on Night 2 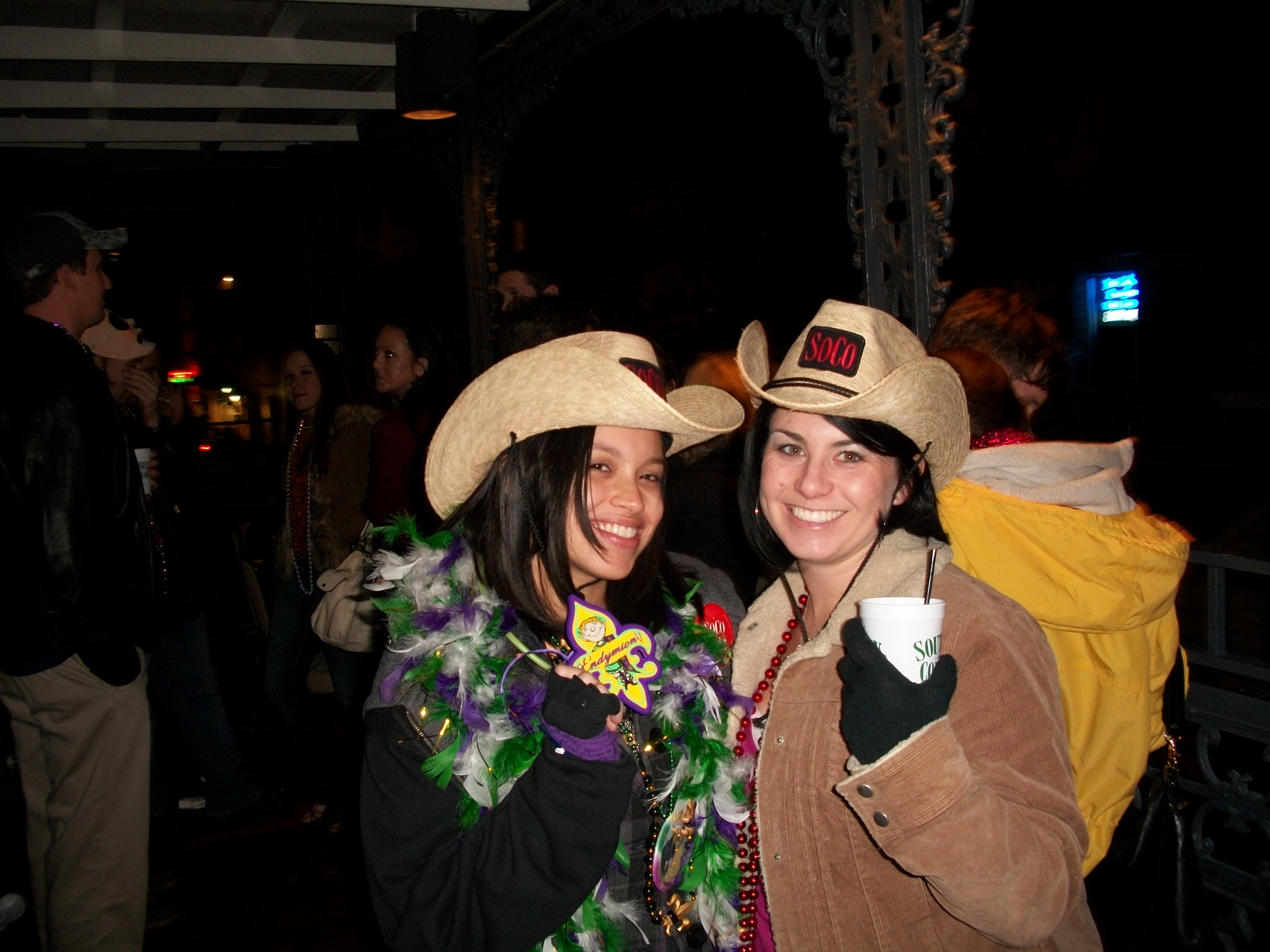 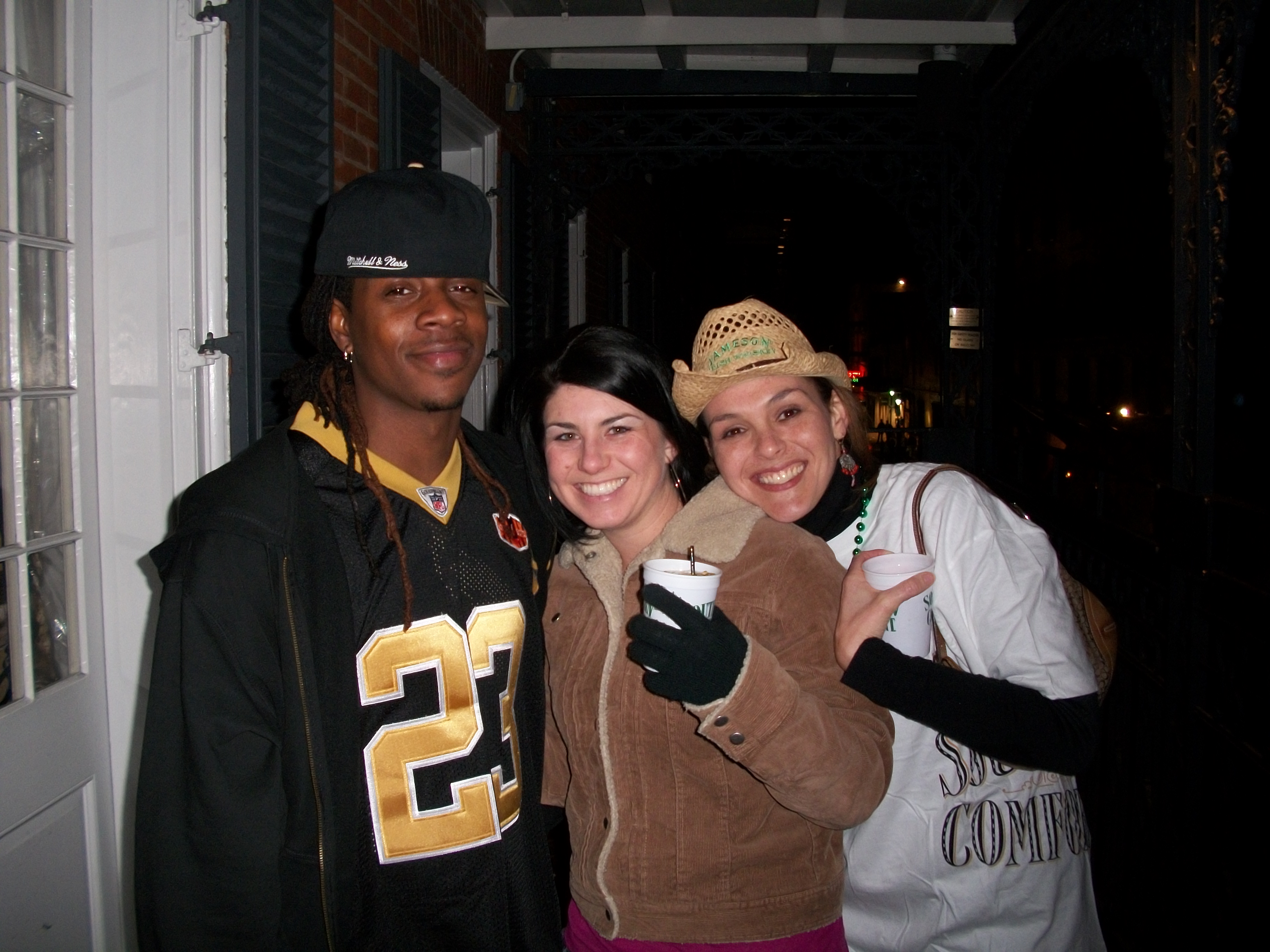 Some of my work crew 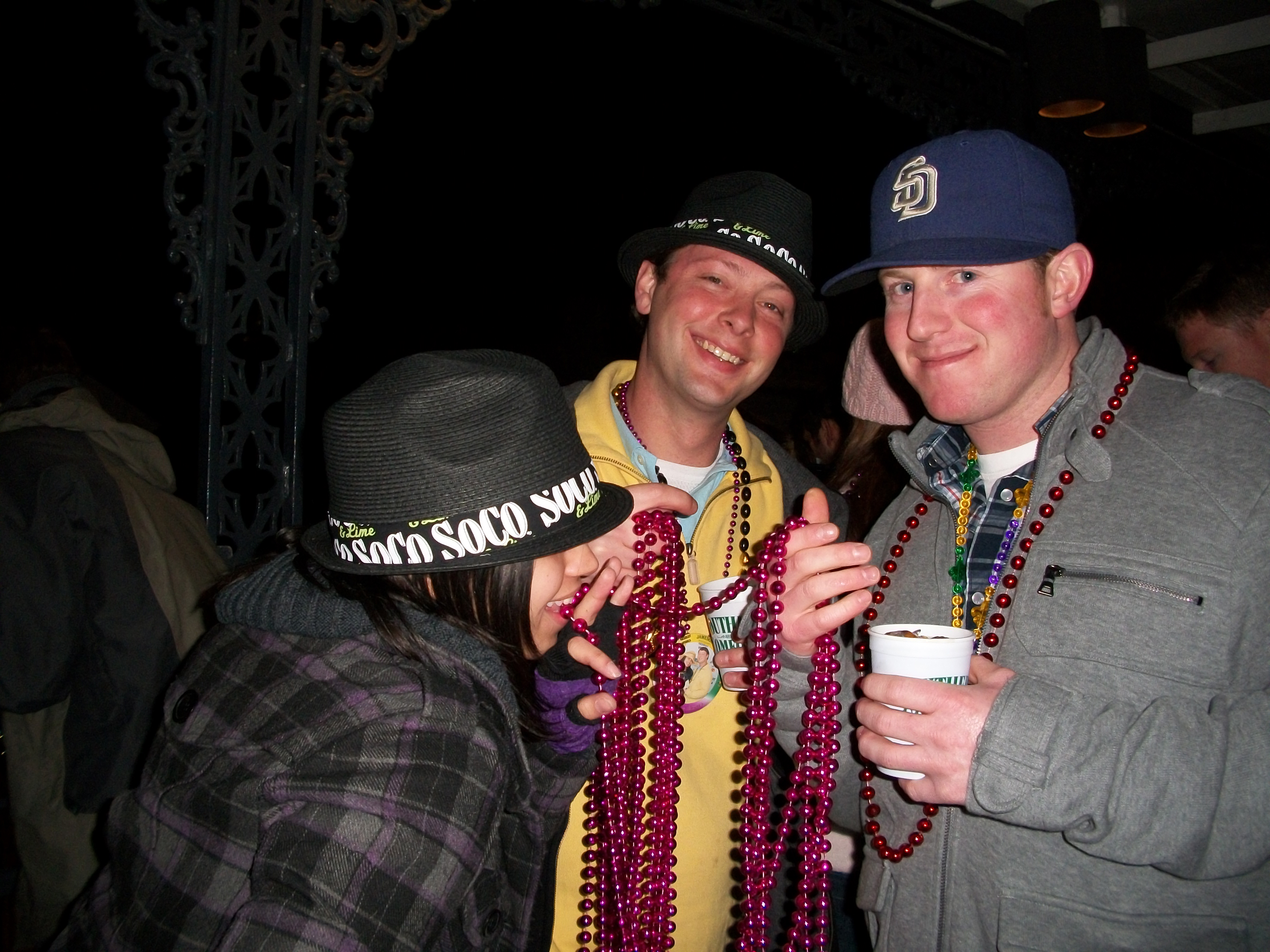 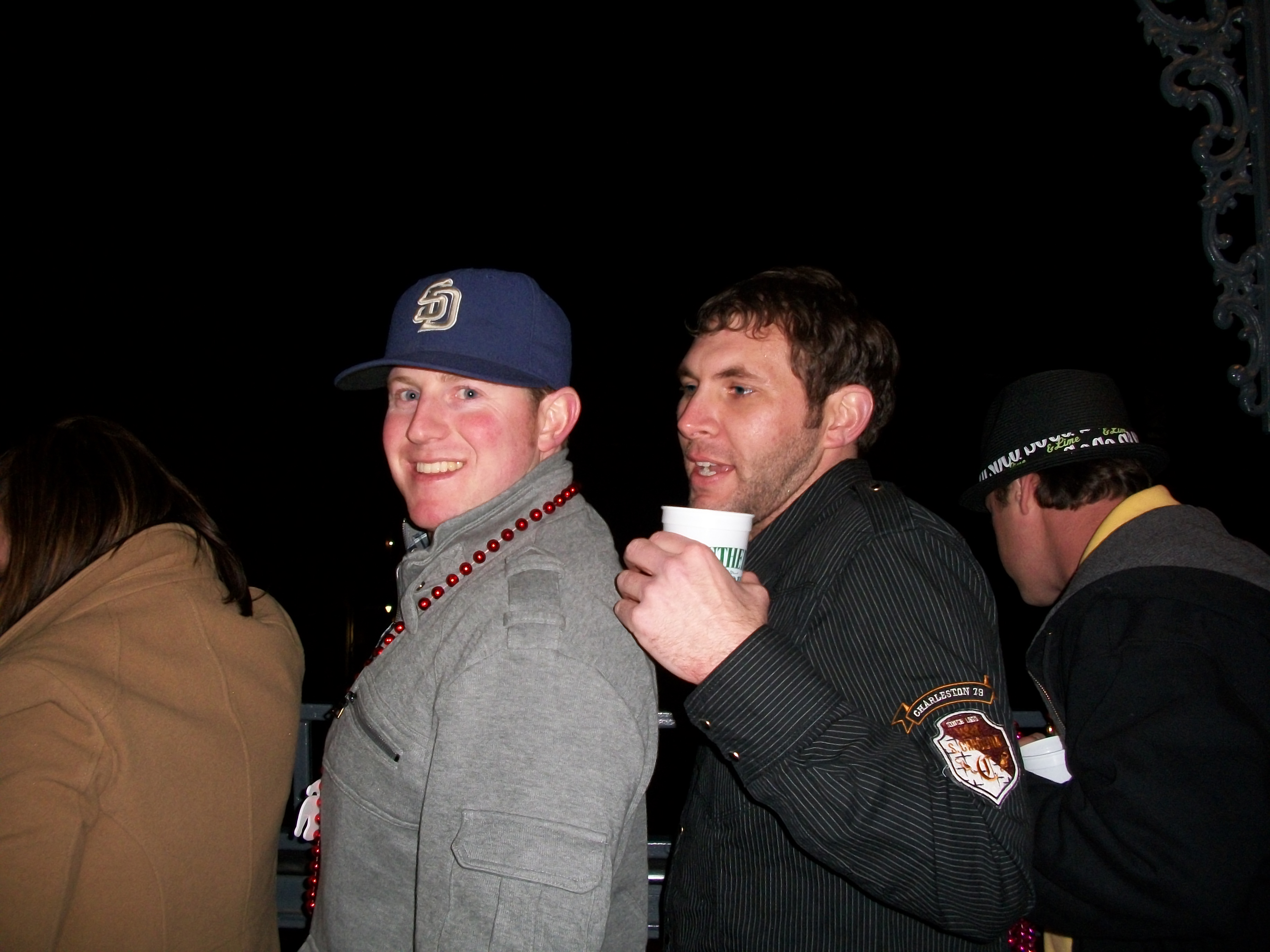 Joe and one of my work friends tossing beads 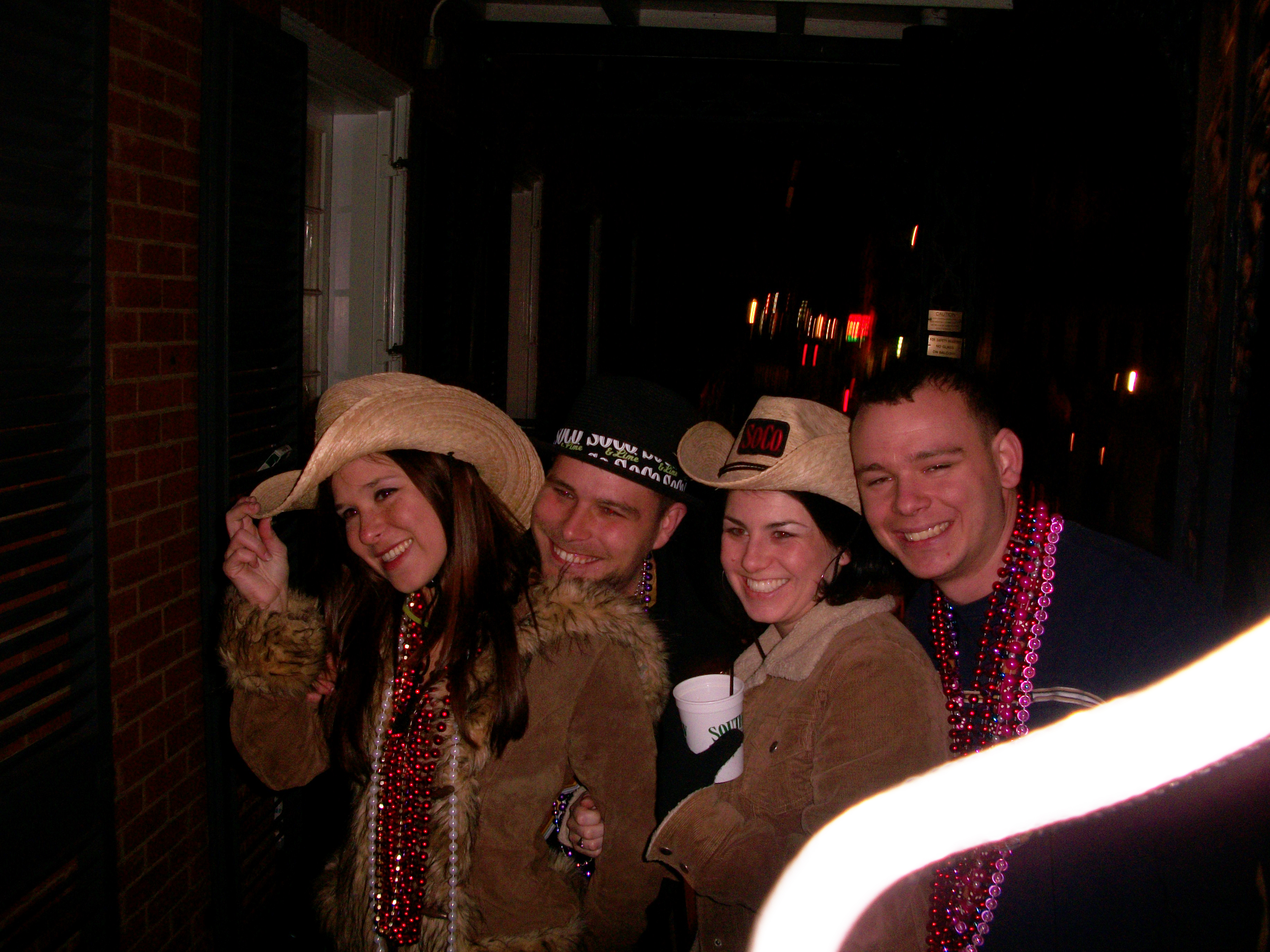 More of my work crew 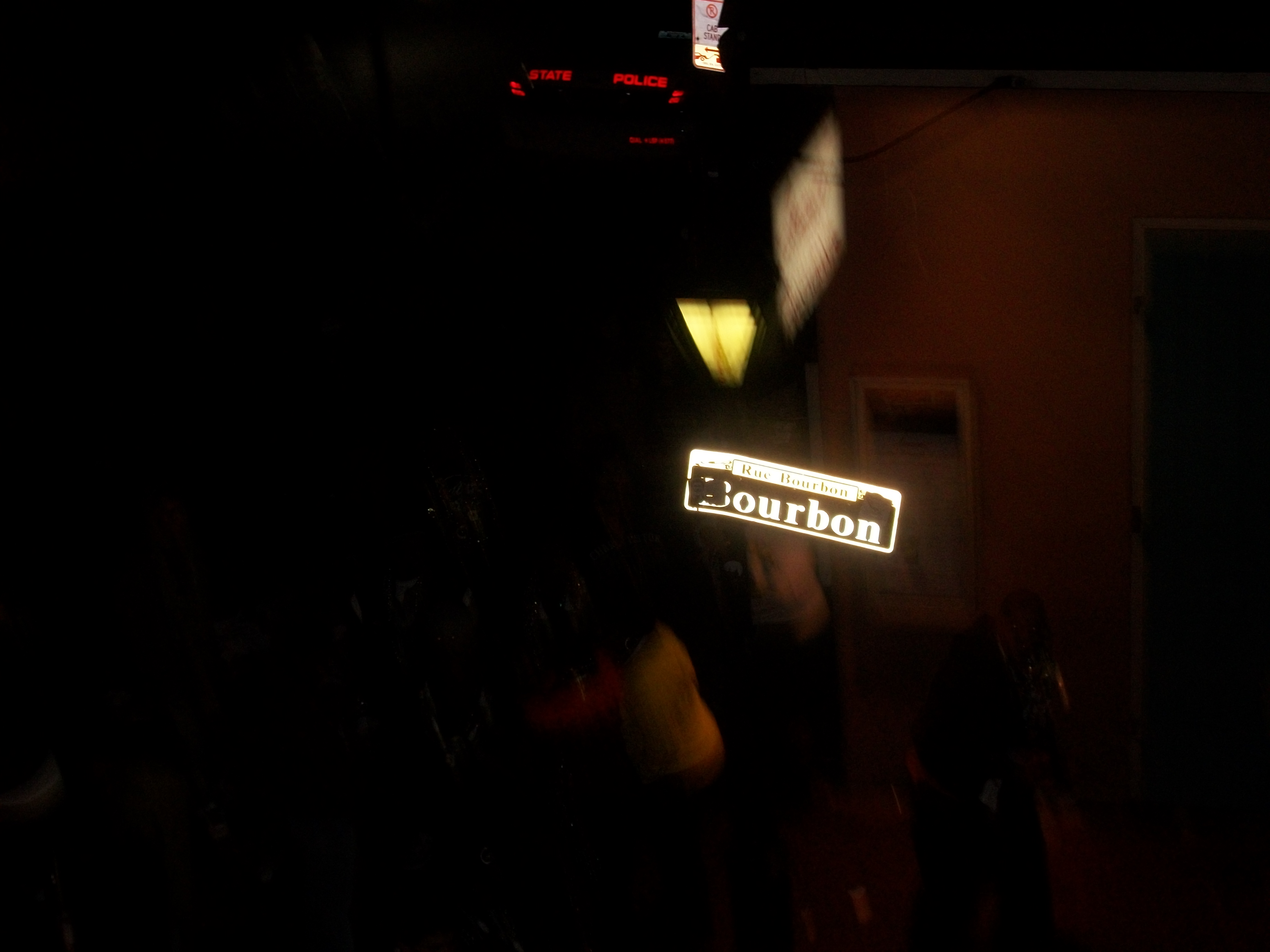 Proof of our time on Bourbon Street 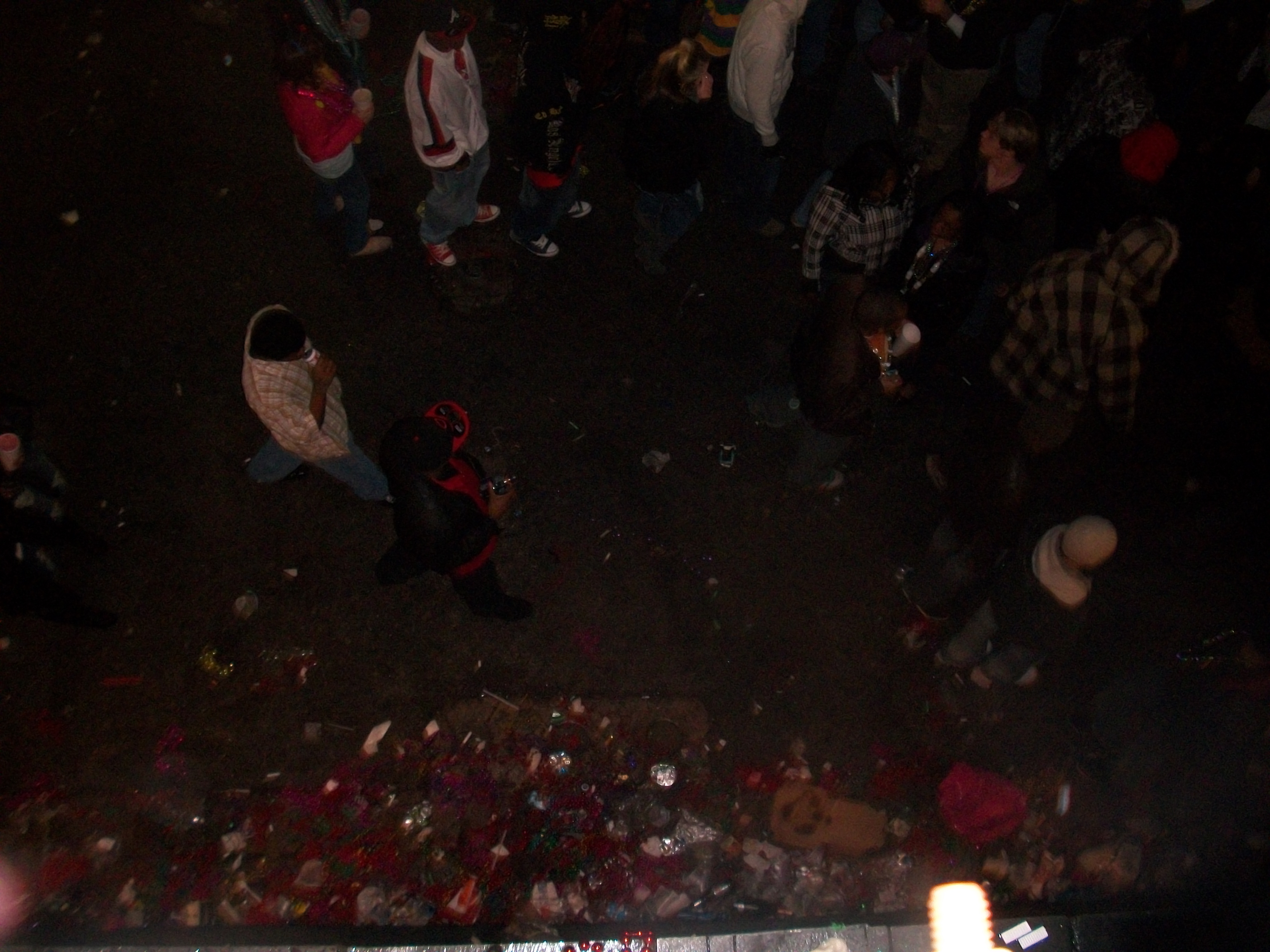 Saturday was capped off with Joe winning big at the casino, which prompted him to ask if his feet were evening touching the ground he was so pleased. I can’t blame the kid. It was a solid night all around.

Sunday was spent primarily on the couch, since we were exhausted from the night(s) before. We ordered a pizza, watched tv then had a late dinner at Acme Oyster House where we dined on chargrilled oysters, seafood gumbo and friend shrimp. After returning home we rented a movie and watched it before getting up before dawn to get Joe to the airport.

For our first Mardi Gras, I have to say it was a pretty decent one. Though we’re both unsure as to how people do this for a week straight. Not to mention the extra few days thrown in for the Saints Superbowl victory and parade. They clearly have livers of steel.

2 thoughts on “A Weekend of Gras!”