I’ve wrapped up two more ballparks in my quest to see all the MLB yards…this swing was a quick one, since I have events at work all weekend but I managed to steal some time for a spin through Arizona to see Chase Stadium and Thursday night will find me in {gag} Dodger Stadium. As a Giants fan by birth, I almost couldn’t event type the words. 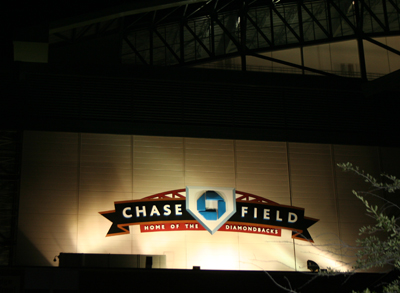 Wednesday night’s excursion to Chase Field in Phoenix was positive for a couple of reasons. The first being that this was the view from my seats: 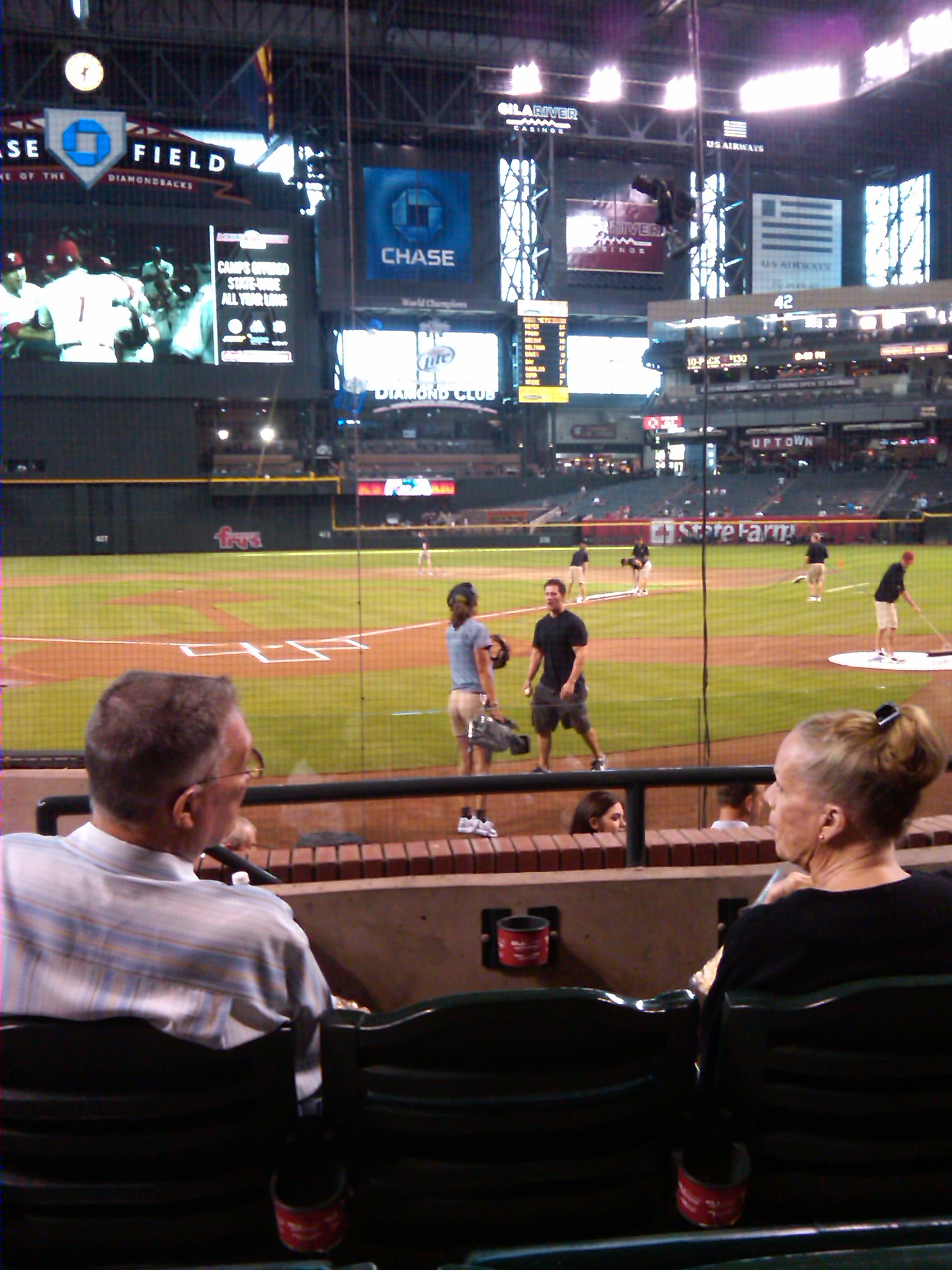 This is just how I roll

The second was that they were playing the Mets and I think we all know how I feel about the Mets third baseman. But the Stadium was a nice experience as well, despite me not getting to do much exploring outside of the gates. Upon my arrival at the plaza/entry way where Will Call tickets could be picked up, there was a bustle of activity, like any ballgame should have. Also, the Will Call Kiosks? Very convenient. There was a bar & grill-looking place across the way, which looked to be home to many pre-gaming fans. The area around the ballpark looked as though it was in the process of being developed and my driver kindly informed me that during the Suns-Lakers games, this place was a zoo. I imagine that when events are taking place at the various arenas that are just blocks away, there is a buzz of activity but I also got the impression that without those activities, there wouldn’t be much action on a random Thursday night, for instance. 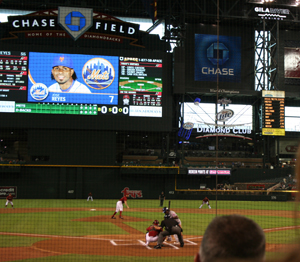 I took my seat and enjoyed an adult beverage from the underground restaurant/bar that was directly below my seat and close in proximity. They had go cups, which, after living in New Orleans, I have learned to appreciate. The stadium wasn’t as full as it should have been, but then again the poor Diamondbacks are currently 19 games out of first, so I guess that might have something to do with it.

As I lowered my beer into my cupholder, I look up two rows in front of me and see none other than my college team’s centerfielder, who I haven’t seen in a few years. Total pleasant surprise since Matty was one of the guys at UCSD who always made me feel like a part of the club. *Side story, one time, during practice, our left-handed hitting catcher was taking BP and I was sitting Zack Morris style in a chair along the first baseline, watching and charting. I was a ways a way from the field but staying loose since Jeff had some pop and sure enough, he sent a screaming rod right at me. I hopped up quick but it still tagged me in the leg or foot somewhere as I was getting out of the way. The next day, it was Matty who had taken my chair and set up the L-screen and orange cones around it. It was a good one. 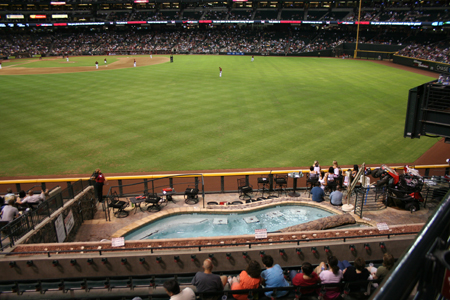 So back to the ball park…The inside feel of the ballpark is similar to the newer stadiums in that it’s got big, open breezeways, which I have always appreciated. As you walk around the inside, you never lose sight of the action and there are no real field-blocking walls or club seats ahem, CitiField, behind the plate. They have a pool in right-centerfield which is neat and they offer a good selection of ballpark food.

For being a relatively new team, they do try and honor those players of their history, but they also do a nice job of honoring their current club members, with a big wall mural of any D-Back who has ever been selected to an All-Star game. They also have former player races, which are hilarious, since Mark Grace has yet to win one. Randy Johnson, Matt Williams and Luis Gonzalez have all by-passed Gracie in a spin-off of the sausage races of Milwaukee. 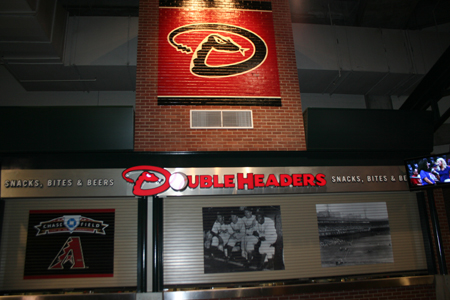 A good mix of logos and old-time photos

I forgot my New York Times’ Food Guide but apparently the can’t miss item in AZ was garlic fries from Gordon Biersch so I’m ok with bypassing those.

The game was low-scoring, which wasn’t as exciting but it did go 14 innings (all of which, I saw) but the D-Backs have it tough. As it was explained to me, Phoenix is such a transplant city, most of the people who live there already have team affiliations that aren’t the Diamondbacks, which may explain why they have awesome out of town scoreboards, so the people that go to the game can still keep up with their hometown teams. Whatever the reason, they are large and very visible, which is worth some points in the ranking system. 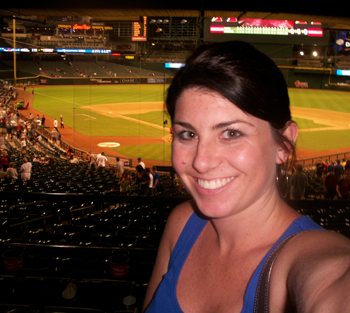 Overall, I would definitely go back and give the stadium a solid 6, maybe a 7. They get points for the open feel of the stadium with a solid scoreboard and jumbo-tron but are also saddled with a loss of points for the fact that their fan base isn’t the die-hard base (yet) and the bit of a warehouse-feel the stadium has when the roof is closed as it was when I visited. On the plus side, that roof kept out 110-degree heat. It’s a trade off.