Oh Dodger Stadium. We have such a love-hate relationship. By birth, I’m a Giants fan, and was therefore raised to loathe you. Yet, when I entered, I thought, “self, this isn’t so bad. Just rip the band-aid off and go for it.“

And for about 3 innings I was all right. Then the stands started to fill up and I was surrounded by Dodger fans. Ugh. But, points for having a loyal and passionate fan base.

Bobby and Jason picked me up around 1:30 and we got caught up over a hole-in-the-wall Mexican restaurant near the stadium. Maybe it was the strawberry margarita talking but I went into Dodger Stadium with an open mind. After all, it’s one of the oldest stadiums left with all the rebuilding going on. 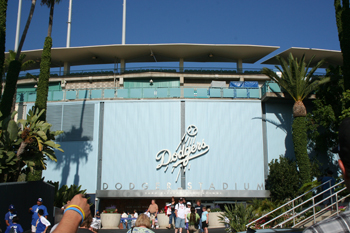 The boys and I drove into Chavez Ravine around 5:15 and parking was amazingly easy and cheap ($15 compared to $30 at Pac-Bell!) and we proceeded to Will Call, got our tickets no problem and headed up the escalator to enter.

They didn’t let fans in until closer to 5:45 but it was all right, we just stood in line and people-watched. There wasn’t much going on outside the stadium. They have massive parking lots but prohibit tailgating so that’s no fun.

Finally we entered and made our way to our seats to watch BP. We were in the RF upper reserve level, which was a decent view. I was still feeling ok about this whole Dodgers thing. 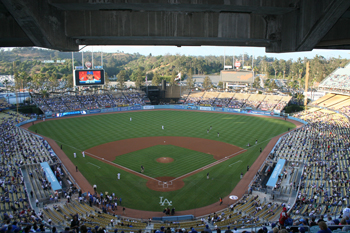 A shot of that famous LA behind the dish

Before the game got going, we walked around the upper level breezeway and enjoyed an adult beverage, taking it all in. I did appreciate the fact that the ushers didn’t give us any grief about standing in the left field upper reserve shade prior to the game.

We made it back to our seats in time for first pitch and the area around us had really filled up with families and fans, which is another criteria earning positive points. Good family/fan atmosphere. I was thinking it was somewhere around a 7 at this point. Then the game got going and everything was still ok. The stadium had loads of snack bars at which you could buy Dodgerdogs and the lines were never too bad. I happened to be in the world’s slowest line for a bottle of water and a cup of coffee but it was definitely just my unfortunate luck, not standard. 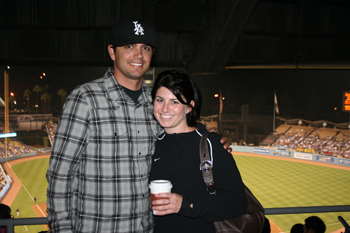 About the 7th inning, the boys and I decided it was time to walk around and take in some sights of the yard. Only, they wouldn’t let us! It’s baseball fan segregation, I tell you! I’m not looking to swoop on people’s seats down there but God forbid I mix in with the fancy people on the lower levels. Huge point loss for this. I was not a happy camper.

So, in conclusion, the stadium gets points for its history and fan base and snack bar lines but a huge deduction for the lack of pre-game atmosphere and the no-fan-mixing policy. Crowd-control, the usher called it. Whatever. Not my fault that the Dodgers are concerned about their fanbase getting too crazy, but thanks for ruining it for the rest of us trying to appreciate the stadium. On the plus side, I got a chance to take pictures with the guys, since I didn’t have any pics with them prior to 2006. Bob, we’re gonna have to take a re-do, I didn’t realize this was blurry. Fail. 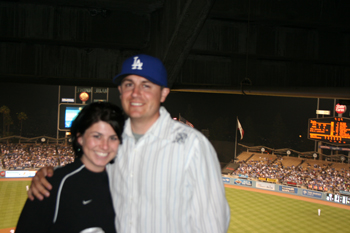 Right after I was told I was prohibited from mingling with the fancy people, I was feeling like the stadium was a 4 but in hindsight, I give it a high 5. The stadium does come complete with Vin Scully. But since fans don’t get the opportunity to fully enjoy the stadium, I can’t give it higher than that.

Thank goodness I got that one over with.