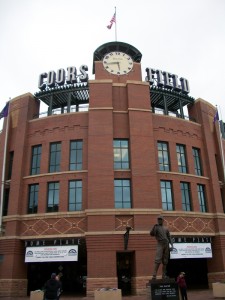 This post about Coors Field is long over due. Normally it doesn’t take me this long to get a review of my latest stadium up, but sadly, adult life (read: a full-time job) got in the way of posting in a timely fashion. So let’s pretend that I have just returned from Denver, instead of 2 weeks ago.

Coors Field has some pretty big shoes to fill because on the trip to the airport (the first time) my Uncle Nick had made it out to be pretty spectacular. I have to say, I agree with him. So much so, that I give the ballpark a 7.5. He had explained that the area had basically been a ghetto prior to the building of the field and it was the building of the field that initiated all the development around the part of town. And it was a nice area; it had shops and loft apartments and what appeared to be a great bar scene. I immediately got my ticket from the ticket lady about an hour and 30 minutes before the scheduled first pitch. Upon entry, I noticed the big, open breezeways that had great sight lines to the field. Considered the Rockies (and their stadium) came to be about 17 years ago (give or take a year or two) it still seemed very contemporary for its design. 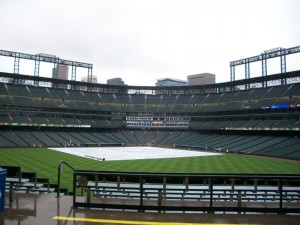 Of course, I was greeted with the tarp on the infield and the temperature seemingly frozen at 39 degrees. I did a lap around the field level and took a look around. Since I had nothing but time to kill, I stopped to ask an usher if he had any idea if the game was going to be played because, at that point, it was still up in the air due to the heavy mist that continually came down.

I was betting they would and had a really well-formulated argument in favor of playing. The Rockies and Mets didn’t face each other anymore this season so I wasn’t sure when they would have had an opportunity to play again, thus the need to absolutely get this game in, no matter how late first pitch would be. I had also asked some knowledgeable resources (read: the members of the Padres organization I had chatted with earlier) and they agreed they would play it. The trick was that I had to leave for the airport no later than 3:30 so I was already only going to see a few innings of the scheduled game and now it was looking like it was surely going to be delayed. I got nervous. 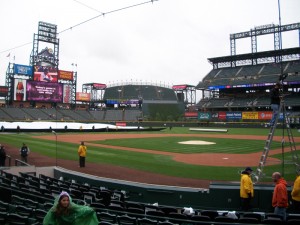 The usher said they would usually take the tarp off about 30 minutes out so if I didn’t see movement by 12:35 or so, I could bet it would be delayed. I explained my situation and we struck up a conversation. In the mean time, another usher (who I later learned was the supervisor) joined us and the usher passed along my story to the head guy. Boss Man Dan, as I will now call him, was very helpful. He was also the one to notice that my fingertips were beginning to turn purple and he went and got me some hand warmers from their secret usher stash (which may or may not have been First Aid, but I was grateful either way). This won some serious points. I gotta say, the Rockies have a great crew. They are all extremely helpful and I enjoyed talking with them. Even the lady who sold me my ticket was pleasant. One of the ushers, Tim, had lived in Vallejo for quite some time so naturally, we talked about that. The ushers directed me to some quality barbecue and my sandwich of Texas brisket wasn’t too shabby. 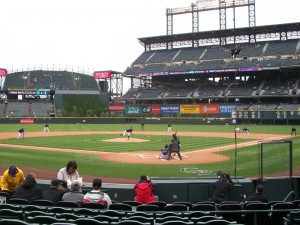 Eventually the Official Rain Delay screen shot came on the screens around the ball park but no estimated time was listed. Since I had made friends with the ushers, they were keeping me posted based on what they heard on the radios. I walked around the yard again and looked to find the food the New York Times recommended, which was mini-doughnuts. I didn’t see them on my lap, so of course went back to my Coors Field resources and I asked the ushers if they knew of anything like that. While he did know what I was talking about, he pulled out his concession map because it had occurred to him that he hadn’t seen any this season. He couldn’t find them on the map either so I assume they weren’t offering mini doughnuts yet. Bummer. I love a good doughnut…Could’ve made the stadium an 8. 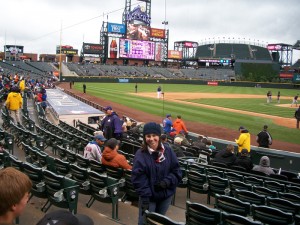 After I settled on some hot chocolate, the cashier said something about the airlines being all messed up so it occurred to me that I should check my flight because, as it was then shaping up, I was not going to see a baseball game with this rain delay. Boss Man Dan had told me I had until first pitch to request a ticket refund, hence the reason they were keeping me updated.

I went to the Southwest website and sure enough, my flight was delayed. I’ve never been so excited for a delay. Fast forward to the tarp coming off at approximately 2:15 and I got so excited, I moved down to my seat, standing watching the activities.

My usher friends came down and toweled my seat off (very nice of them) and we finally got under way at 3:20. Because of my delayed flight, I knew I had to leave the ball park no later than 5:45 in order to pick up my luggage and make it to the airport. That was just enough for seven innings and two of Carlos Beltran’s three homeruns. 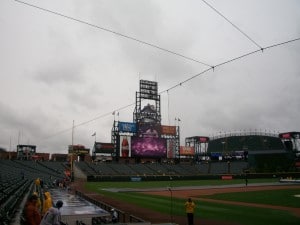 The stadium has a great atmosphere and similarly to Pac Bell Park, I don’t think there is a bad seat in the house. I also liked that they have a row of purple seats running across the upper deck, which marks to Mile High altitude point. They are also a Coke stadium (as opposed to Pepsi) which earns them points in my book. The Rockies’ jumbo-tron is also good-sized and aesthetically-pleasing. It serves as a nice pillar out in left field.

And did I mention how friendly everyone was? Basically, all I did that entire day was make friends. With the pleasant ushers, the girl sitting behind me…(Kate, who will now be meeting me in Philly, when it comes time to visit that stadium. I am 100% positive that we will have a blast there.) 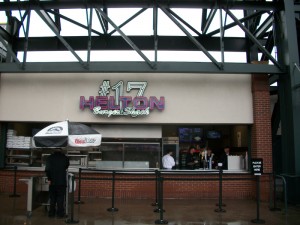 The only thing the stadium lacks is a nod to their history, but, it defense of the franchise, they haven’t been around long enough to accumulate such a thing. I have a sneaking suspicion that in the future, there will be nods to Todd Helton and Troy Tulowitzki all over that place. I would, if I were the Rockies. Just sayin’.

In the mean time, there is Helton’s burger shack in left field so I appreciate the attempt.

Over all, Uncle Nick wasn’t wrong; it’s a great ball park, definitely one of my new favorites and I have every intention of visiting again soon, this time, preferably with my cousins attending with me, as was planned this trip, which the snow derailed.

3 thoughts on “Making Friends at the Yard”