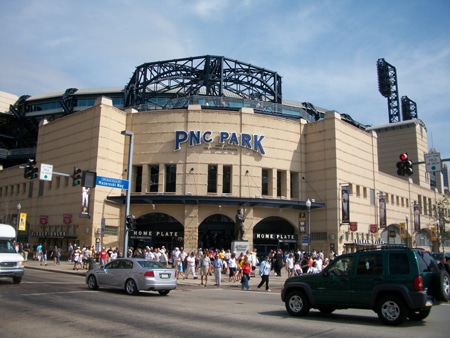 PNC has been all the rave among everyone I have ever talked to about it. Pirates and non-Pirates fans alike, have promised me this will be my favorite ballpark. Lots of people, mostly fans of their native ballpark, say this to me, but I have to agree, PNC might be the new favorite. It’s definitely a top 5.

However, let’s get two things out of the way. For starters, there is no Bo Derek of baseball stadiums; aka, there is no way for any ballpark to achieve a perfect 10, with the exception of Wrigley, Fenway and Old Yankee Stadium, as they have the historic values that the new stadiums just can’t provide. Now that we have established that the best a yard can do is a 9 (according to me) PNC also loses points for being a Pepsi stadium. I think we all know that I’m a Coca-Cola fan at heart.

My dad says this isn’t fair, but I say it’s my ranking system so sure it is.

I took a cab to the ballpark and my driver was kind enough to take me over the bridge so I could see what he deemed “the most impressive view of entry to a ball park”. He was not kidding. Despite a phone call that interrupted me taking it all in (this was the day of the great email hack of 2011–so my phone was blowing up with messages like “did you mean to send me this highly inappropriate email?” No. No I did not.) I still was in awe of the great view leading into PNC, which basically has you come in from centerfield. 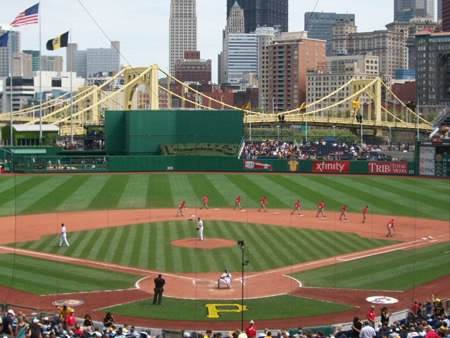 now that is you a backdrop for baseball

I came over the butter-yellow bridges that greet PNC Park fans and really think they did a great job designing this park. I was dropped off a block away, so I could walk in and not have the taxi driver be bogged down with traffic, though there wasn’t much (it was a Wednesday day game). I walked right up to the front and the big, wide streets were shut down to cars so it was just people flocking to the stadium. I like that they shut down the main roads surrounding the ballpark until after the game. There isn’t parking (that I saw) that would warrant cars coming in and out and I suppose the businesses that were surrounding the yard had parked their cars long before they closed the streets.

It also makes for a nice outside atmosphere for the stadium. There are plenty of bars and restaurants to hit before the game (and after) and I am always a fan of a place where people can congregate before and after sporting events to keep the game-like atmosphere going.

At first, I couldn’t find the ticket window, but then I saw ticket kiosks, which work just as well. As I was plugging in my desired seat as “best available” two guys and a girl, all decked out in Pirates gear and perhaps a bit younger than me, asked if I was just buying one ticket. I nodded and they explained that their friend had backed out at the last minute and if I wanted to buy his ticket, he’d give me a deal so it didn’t go to waste. Like an idiot, I said yes, not even asking where the seat was. It was an outfield bleacher seat, which was fine, I suppose. He mentioned that they were being selective about who they asked, as they would be stuck next to the person for 9 innings of their lives they could never get back and I quickly told them about how I like to explore the ballpark so I might not be there long anyway. I also told him I didn’t carry any cash but I’d be happy to buy him a beer inside, if he was ok with that in exchange for the ticket. He was and we all plodded inside.

The inside of the ballpark is very open and the breezeways provide nice sight lines. The rotunda that circles all the way up is nice and gives a great view of the yard from the left field line area. I like how open behind the dish is, I watched about 3 innings from behind the box seats there.

They seem to have a nice mix of food offerings and in the outfield, it almost seems as though there is a food court– like a mall but with actual restaurants in which you seat and eat. I suppose this is nice, but you can’t see the game from inside there so I’d pass, but that is more in the outfield anyway. Behind home plate and the surrounding areas is where the standard baseball fare is to be found. I, of course, used my New York Times food guide and took up their suggestion to eat the pit beef from Manny’s BBQ. Good suggestion too because if they hadn’t said to eat there, I would have had to enjoyed two meals at PNC because we all know my weakness for food from a grill and the smell alone led me to Manny’s. I was like Toucan Sam, just following my nose. It was, in fact, delicious.

Over all it is a great place to watch a game. Good atmosphere, decent fans. I respect their passion but in the bleachers, I was surrounded by rookies. No baseball knowledge whatsoever (no, your starting pitcher is not eligible for the win, he didn’t go five innings. And the reason the second baseman is playing behind the bag at second? That’s called a shift and it’s standard for guys like Prince Fielder. Why is that K backwards? Mental headslap, outward groan). It killed me. They were saved by an older couple who were standing with me behind the dish. They had been lifelong Pirates fans and the wife could hold her own with baseball knowledge. I don’t doubt that I saw a sneak peek at my life in 40 years when speaking to them. 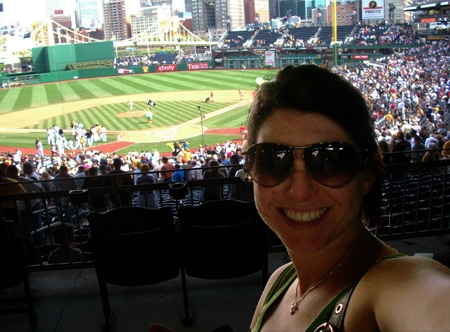 My view for the last 3 innings of the game

This ballpark easily earned its 8.5 rating. I’d go back to watch a game in a heartbeat. Well done Pittsburgh, well done.