I haven’t had a good night’s sleep in a while– I wake up often so even though I’m physically in bed for about 6 hours, I’m only really asleep for much less than that.

So when I went to sleep tonight, and was awakened by a horn honking, that sounded like it originated from a big rig, I thought the garbage man had come a day early and I was pissed that he had awakened me from my precious little sleep. It was 1:21 in the morning. I peeked out my front window to see what the heckfire was going on and I saw this: 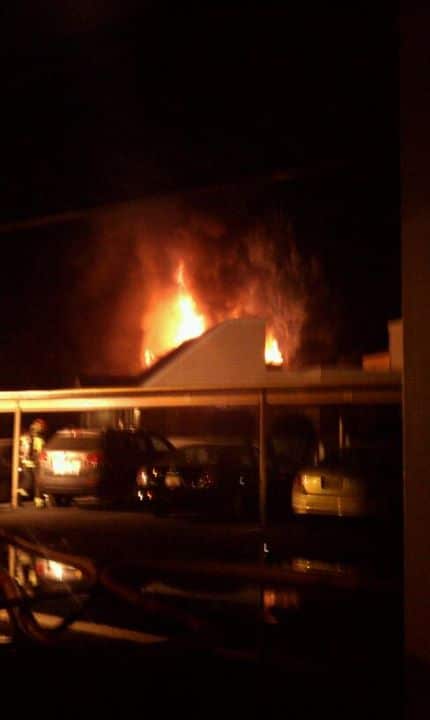 No smoke alarms from outside, no commotion, just a simple honk of the horn of a fire truck. Thank goodness it woke me up. I almost rolled over but I was too angry to do that, but suddenly in adrenaline mode when I saw across the parking lot from me. I took that pic from my front yard and it was approximately 50 yards from my house.

Now I can’t sleep because it’s almost 3am and the trucks are still cleaning up, but there is nothing to see anymore.

From all accounts (and by accounts, I mean, scuttlebutt from neighbors as we huddled together to figure out what the heck is going on) no one was hurt; the poor person who lived there literally just moved in (I had to ask them to move their truck so I could get out yesterday) and the neighbors who shared walls with the house that was on fire didn’t seem to lose anything. There was probably some serious smoke damage but when I woke up, they were already packing items into their cars. Not that any of us could have evacuated by car– we were all blocked in by the fire trucks.

Sidenote: the owner of Barky-McBarkerson (if you have ever been to my house, you know exactly which neighbor and rat dog I’m talking about) found out it is illegal to drive over a fire hose, as she was going to evacuate by driving her truck over one. Bad idea.)

It brought back memories of the time I had to evacuate my apartment in San Diego from the grass fires. They were worried those fires would hop within the area known as the Golden Triangle and thus head towards my house. I remember packing up my scrapbooks and Napa High Football helmet and driving to Orange County to stay with the Crissmans. I was lucky; nothing happened, as the winds shifted and the fire blew the other way so I was safe, but the mere act of having to decide what to grab to take with you is absolutely one of the most frightening things to have happen…especially when you’re by yourself.

On the plus side, I met two of my neighbors, both of whom are super cool. They were easily identifiable in the commotion because they were neither drinking Coors Light in this time of crisis nor chain smoking (at a fire…um, hello?!?)