As a spur-of-the-moment Easter weekend trip, Dave and I decided to head to Paris. We literally bought tickets on Tuesday for a Friday night departure. Only about 3.5 hours away by train, we got into Paris around 10pm and immediately set out to find our place for the weekend. We booked through airbnb.com and stayed in the 5th arrondissement of the city (known as the Latin Quarter) and we couldn’t have been happier with our place, but more on that later…

Since Friday night was mostly travel, let’s get to the good stuff on Saturday.

We woke up extremely early for a Saturday, but from everything we’d read, we knew all the places we wanted to see would be packed with tourists. Those reviews were not kidding, btw. I’ve never seen so many grown men and women hold up sticks and poles with something hanging from the end to help tourists find their appropriate group in the crowd.

Despite it being around 35 degrees (I don’t think it ever got above 45 the entire trip), we decided to forgo coffee in favor of getting to Notre Dame early, around 8am. It was just a quick walk from our place and even as we approached, it was just as gorgeous as it was up close: 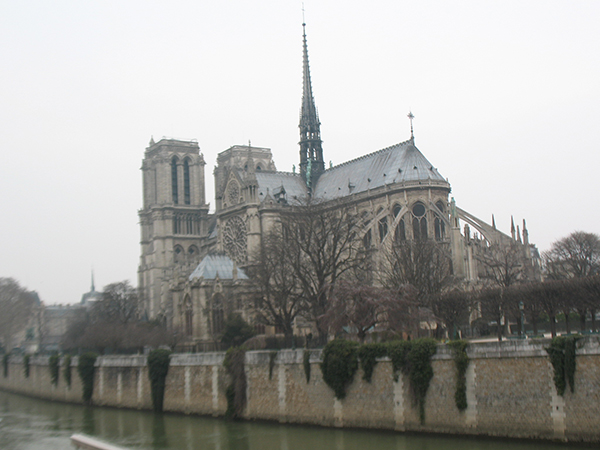 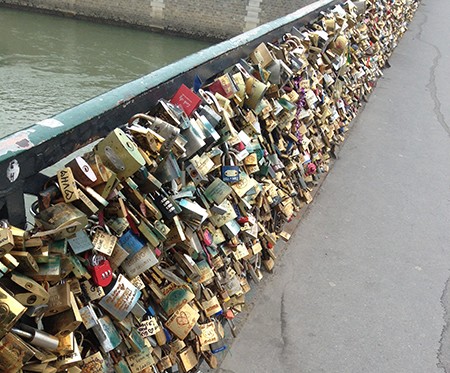 As we crossed the bridge on the approach, we also saw that the bridge was encased in various types of locks. I had heard about this tradition from my friend Natalie, who had done something similar in Montpellier at the Rives du Lez before they moved back to the States. The locks display the names/initials of a couple (or in Natalie’s case, the family) and once locked, they throw the key into the Seine River as a symbol of their love for one another. Cool, right?

But back to Notre Dame. It was gorgeous. See for yourself (click image for gallery):

Following Notre Dame, we did find some coffee and actually stopped for breakfast at a Cafe somewhere between Notre Dame and the Louvre, then it was off to the Musee Louvre! We arrived around 9:30 and were greeted with hoards of people, which probably only got worse as the afternoon wore on (glad we got there early).

The Louvre was pretty amazing, in that there are so many pieces that you always hear about but rarely get to see with your own two eyes. We saw the Winged Victory of Samothrace, the Mona Lisa (obviously), Venus de Milo, Code of Hammurabi…there were a ton of historical pieces…Not to mention Napoleon III’s apartment.

The one thing I will say about the Louvre is that it’s tough to navigate to these popular pieces. They are placed at bottleneck points within the museum so it makes it tough to really and truly appreciate what you’re seeing in person. After my bubbling frustrations of being elbowed and shoved hit a boiling point, I started doling that ish right back out, which led to a) no one even noticing and b) some quasi decent photos.

We actually left the Louvre prior to seeing Napoleon’s apartment but after finding a small cafe at which to have lunch, we headed back to check it out (also because they have real restrooms there and public bathrooms in Europe scare me).

I can’t believe how many historical works are housed at the Louvre. The size of it completely baffled me, because when you arrive, it’s a giant empty plaza with a large, glass triangle-shaped entry, that leads you down “under ground.” It’s quite deceptive, until you get inside. At first glance from the outside, I didn’t really pay much attention to the historic buildings surrounding the plaza, despite them actually being part of the museum. But because they are so spread out, they almost don’t seem like it.

After the Louvre, we wandered out to continue our afternoon…more from the Champs-Élysées and the Arc de Triomphe next time!

2 thoughts on “A Weekend in Paris: Day 1 – Notre Dame and the Louvre”