We woke up early on Tuesday to get on the road to Tours, south of Normandy and back in the Loire Valley and we had lined up an appointment at a winery in Vouvray on the way. The vines of the winery had been devastated by hail recently and the owner was still kind enough to pour wines for us and open her family’s winery up so we could tour the cellar, which was about 400 years old (she was 11th generation Vouvray herself!) After walking around the tiny town for a bit, we got back on the road, arriving at the hotel by mid-afternoon.

the winery we visited is right over that wall, along this tiny road

By Day 3 of our adventure, and following the two very busy previous days, we were a bit worn out and figured a quick nap was in order. Plus, these budget European hotels are often setup to accommodate three people to a room, which in a small space, means a bunk bed above the double and forgetting that it was there, I bonked my head pretty good. Thus, it was time to just ease up and nap.

After resting up though, we drove into the center of town and scoped out St. Gathien. The cathedral was gorgeous from the outside, with ornate carvings on the façade. Inside, we were not disappointed, either. The stained glass alone was worth the visit, as it was the most detailed and gorgeous stained glass I had seen. We tried to do it justice with a camera, but don’t know that it’s possible.

We wandered around Tours a bit longer, finding our way to a popular square with many restaurants and brasseries. This was also very obviously the American college kid hang out, as we were surrounded by American English-speaking 20-somethings, with their hipster glasses, debating which state is better: Michigan or Colorado.

On the way home, we opted for a lighter dinner and we had a “picnic” in our hotel room, which proved to be a smart choice since the rains had finally caught up to us.

the plaza in Tours

one of our “hotel picnics”

The morning of Day 4 was still dreary and wet as we made our way towards Sancerre. The night before, Dave had looked up castles and chateaus in the area and while we debated between visiting Château de Chambord or Chenonceau, we ended up visiting Chenonceau after learning it was still mostly intact after the Revolution, as opposed to Chambord, which had been raided pretty heavily during the Revolution.

Chenonceau was absolutely stunning. It was originally spelled with an x on the end, a demarcation of royalty, it also was created with the only bridge across the river, so during the Revolution, in exchange for use of the bridge and the removal of the x in the spelling, it was spared.

While the chateau was gorgeous, it was the gardens that I enjoyed best. Still incredibly maintained, they grew all the vegetables, fruits and flowers one could ever need and apparently is now used for children’s workshops.the drizzle didn’t even bother us as I think I snapped just as many photos in the garden as I did of the rest of the grounds, including the chateau!

the “bridge” was actually a long room, which also served as an infirmary.

the “bridge” was actually a long room over the water.

these small fruit “trees” were about a foot off the ground and served as boundaries for the garden plots. So cute!

garden with the farmhouse in the background

As we made our way closer to Sancerre, we stopped for lunch in the next town over, where I had the richest French food I think I’ve ever eaten. Trying to be adventurous, I ordered a galette of bleu cheese, walnuts, creme fraîche and chives. Though the flavors were lovely and completely compatible, I couldn’t eat anymore than half before feeling full. Wow. That clearly was the richness people think of when they hear French food. Even Dave said his was rich too and it included salad greens on top, but the rich cheeses can do a person in. there’s a thought I never expected to have cross my mind!

As we got closer to Sancerre, the rain came and went, finally letting up as we approached the city in late afternoon. We had booked a cute little place in Chavignol, which is a small village just outside Sancerre and famous for its goat cheese. (Fun fact: in France, the wine regions are called AOCs, which are similar to AVAs in America and the goat cheese in Chavignol is so famous, it has its own AOC Crottin de Chavignol so if you ever see Crottin cheese, you will know a) it’s delicious and b) it’s goat cheese from Chavignol.)

Our airbnb host Brigette was incredibly nice and helpful, even offering a tasting at her family winery, where her brother and nephew now run the operation after her father’s retirement. Her nephew is in his mid 20s and had also studied winemaking in Montpellier, coincidentally, and he was kind enough to stay late and pour wines for us, answering all of our wine geek questions about battonage and saignée. The bottle of white we purchased will be thoroughly enjoyed on Elba later this summer.

Following a walk up the hill to capture the view of Sancerre, we had dinner at the bistro across the street. One of only three restaurants in town, we lucked out and had a tasty meal with a half bottle of Sancerre Rouge. Prior to this visit, I was only familiar with Sancerre Blanc (Sauvignon blanc, by AOC rules). I had no idea a Sancerre Rouge or Rosé existed. Made from Pinot Noir grapes (also by AOC rules), the reds we tried were nice, easy-drinking pinots. 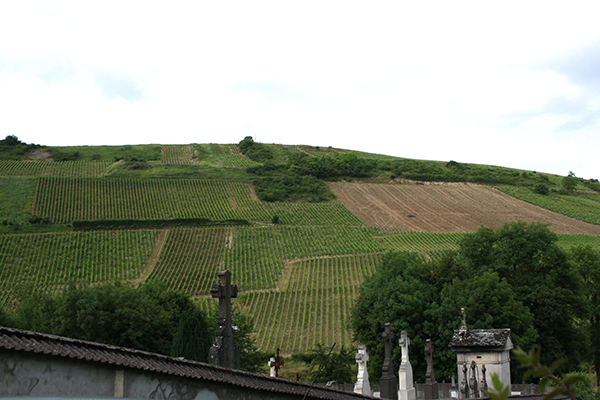 the hills of Chavignol 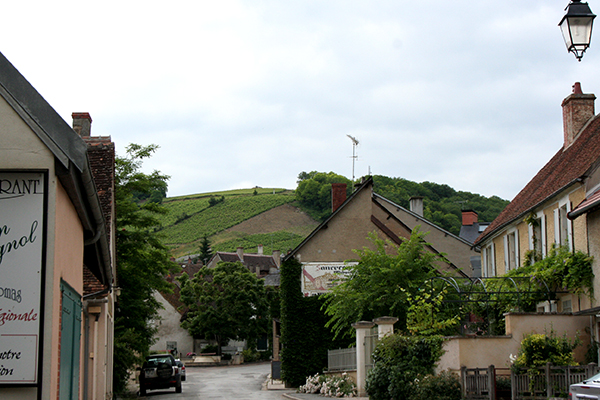 the village of Chavignol

The village of Chavrignol was nice— small, but nice, and we enjoyed the tasting at Domaine Delaporte and our dinner hit the spot. The next morning was again an early one, as we wanted to explore more of Sancerre the city, but I will leave that for the next chapter of our tour.