We made it to Udine, Italy! Monday night/Tuesday was a very long day of travel and by the time we arrived at our place in Udine, I was coming off a severe allergy attack. I don’t exactly know what started it all. Perhaps it was the overly-perfumed lady in front of us on the JFK-Heathrow leg of our voyage. Whatever it was, by the time we were asked to put away all electronic devices in order to land in Venice, I sneezed about nineteen times in a row and people were staring. I was red, puffy, tired from zero sleep, and not in a good space to appreciate arriving in our new town.

The first week, though overall came way easier than it did in Montpellier, was not without its challenges— namely in the form of my luggage. I would love to know where my bag is at this very moment. Luckily, it was the “lesser important” of my two bags, so I suppose that’s the bright side. But we arrived on Tuesday and it’s now Sunday and I want my slippers, makeup and eventually, my summer clothes. Related: I will never allow them to gate-check my bags again. I don’t trust handwritten bag tags, even though Dave’s made it through; ballpoint pen just doesn’t leave me feeling overly confident.

We both really love our apartment (also a far cry from Montpellier) and I am jut floored that it has a dishwasher. I’m basically living in the lap of luxury now. That was an incredibly awesome surprise. Our place is setup in a similar manner to our apartment in Bordeaux, which we loved, only this one is less rent, which makes me love it even more. I will have to take some photos and put them up once we get everything situated. And it has a pull out couch for guests (just sayin’). The building seems to be filled with a nice mix of people— a fair amount of older, grandparent-y people (which makes me feel rather safe, really) and some younger residents as well.

Sidebar: I’m suffering from horrendous jetlag so I am basically nocturnal these days, but it’s now 7:00 AM on the dot (I’ve been up since one) and the church bells in this town are going crazy! It feels very Italian. Also, someone in my apartment building is cooking something that smells like a divine spaghetti sauce. I want to find her and be her friend.

The apartment is owned (I think) by a set of brothers, two of whom live in the building. The unit we rent is owned by a third bother, who lives in NYC of all places. However, he set it up so that his brothers would help us with some technical stuff (like internet). One of the brothers invited us to a pub on Friday night to hear a Pearl Jam tribute band play, which was one up on our social life the first week in Montpellier. (Incidentally, the third brother/other neighbor in this mix is the bassist for the tribute band and I liked him from the get-go because he wore a Detroit Tigers jersey while performing. And not just one of those knockoff jerseys, either— the real, Majestic ones.) 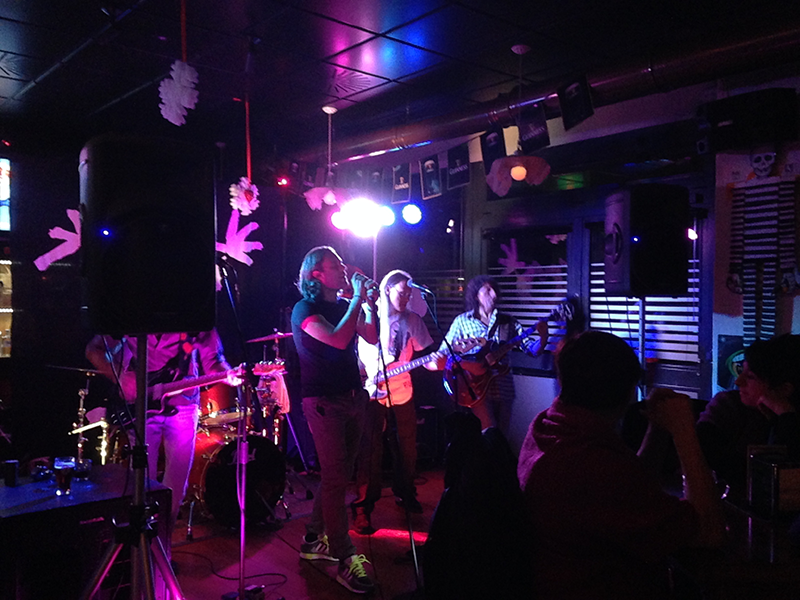 Pearl Jam tribute band at a pub in Udine

Other fun things that happened this week were Dave’s first day of school and the walk that went with it. The first day was the morning after we arrived, which was a bit rough; especially since we didn’t have phones yet to help with navigation on the walk to school (we weren’t prepared to take the bus just yet— we needed internet to find the schedules and stops. Our phones, at this point, were only serving as very expensive flash lights). We thought it would take about 40 minutes to walk, so we left the house around 7:15, for an 8:30 class, just to be safe. About an hour and 30 minutes later, we arrived. Did I mention we walked? And we walked quickly. This wasn’t a stroll. I kept thinking about how I should have limbering up before leaving the house!

I left Dave at class, then looked around to consider my options before embarking on another hour+ journey home, assuming I didn’t get lost or forget my way back. I saw a sign for the bar (what we would call the cafeteria) and figured I would hang out there and actually get some coffee in me before heading to the cell phone store to get my phone working.

I made it back home by 10 and went to the cell phone store, which we had scoped out on our way home from dinner the night before. Feeling confident, I somehow communicated that I needed a SIM card for my iPhone cinque, paid my €25 and waiting for the airline to call with news of my bag (still waiting, British Airlines…)

I was pretty stoked about my ability to get my own phone set up, considering the last time I tried to take care of something like this on my own, it was changing our address with the bank in France and it was so difficult, I had to console myself with pastries.

Dave had half days since this was the first week, so we’ve spent the majority of time trying to get the house setup and finding grocery stores and getting a general lay of the land. Today’s plan is to check out the mercati di Udine, because I love a good farmers’ market, then maybe take the bus to the mall and look around (it’s open on Sundays— a treat indeed!)

We’re still hoping to see some sunshine one of these days, as it’s been overcast and chilly, though nothing unmanageable (after single-digit temps in NY to start 2014, I’ll take mid-40s any day!)

There will certainly be more to come from our new abode and I’m sure I’ll have more fun stories to tell (probably not unlike the story about how I ordered fish ice cream this summer on Elba, instead of peach. Did you know the word for fish is pesce and the word for peach is pesca? True story.)

One thought on “Adventures in Italy: la prima settimana”