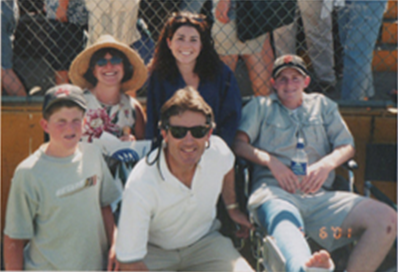 It was about a million degrees that day. Also, who remembers using real film in a camera?

Four days before I graduated high school, my brother broke his leg. He was trying to snag an errant throw at second on a double play during summer baseball and the kid from the other team slid right into him and broke his leg so badly, he had to have (and still has) a metal rod in his leg. He was a sophomore-about-to-be-junior, which also meant that he was going to be moving up to the varsity football team, with his eyes set on being the quarterback in the fall.

This whole broken leg thing sort of got in the way. The doctor even went so far as to say he didn’t think my brother would ever play football again. I’m sure that just motivated my brother more, which ended up working out brilliantly for me.

As soon as the doctor and football trainer said he could, he started rehabbing. Within a week, he had the doctor remove the full-leg cast (he claimed it made his foot tingle from being too tight; I still think it was a clever ruse to get into a walking boot) and shortly after that, he got to walk in a pool while wearing said boot. It was also at this time that my dad got him (and me) a gym membership, so we could all “rehab” together.

That summer, I was in the best shape of my life. We went daily and I felt good. And I felt really good about the way I looked.

I attribute it to the routine/repetition. Because Lord knows my eating habits as an 18-year old on the go weren’t exactly stellar. Plus, I really like carbs. And cheese. Sadly, the carbs and cheese routine is what seems to have stuck with me over the years. But back then, the gym balanced my love of carbs (with the help of teenage-metabolism, I’m sure).

Fast-forward to this week, when Dave and I finally got our European bank accounts squared away (that is another super-fun post for another day). We had looked into gyms around Udine and wound up joining one about a 10-minute walk from our apartment. It’s in the University Center (not the same campus as Dave’s classes, unfortunately) and it’s priced for students, which we always appreciate. And they gave me the under (age) 30 price, so basically they are the best people ever.

Anyway, it’s been three days now and truthfully, I hurt. I shouldn’t have gone this long without a good workout. I had some good routines a few times since that summer, but never as good and I was never dedicated enough to stick with it. I grumble while I’m there now because I just really hate cardio. But I get on the treadmill anyway. Then I lift some weights (gettin’ my money’s worth!). I’ve determined that given my sedentary job, my love of carbs and the readily available supply of them (and cheese) in Italy, all make for a bad combination.

So I’m going. Mostly so I can support my cheese habit here. But also to see if I can get that feeling from the Summer of 2001 back. We’ve decided to try and eat better read: less carbs/cheese Monday-Friday (and not fall victim to the “college diet” that comes with student life and budget) and then Saturday and Sunday can be our splurge days. I’m making French toast tomorrow morning. I’ve already decided.

In the meantime, here’s a tasty recipe that is our dinner tonight. I’ve been working on perfecting it ever since we went to Porto. We had it as an app at the same restaurant that served me the ghastly sandwich, but this was delicious. I’m pretty sure it’s somewhat healthy. It doesn’t have any cheese or bread (but it does taste better with a crusty baguette…just sayin.)

Ingredients
2 (15-oz) cans of garbanzo beans (rinsed & drained)
1 (12-oz) can tuna, drained (I used tuna in olive oil since it’s easier to find here and it works well)
1 cup minced red onion, (about a half a large onion)
3 hard-boiled eggs, peeled and sliced
a dash of of each: basil, oregano, thyme, parsley (I used dried)
heavy splash of white vinegar
olive oil, (4 Tbsp, or to taste)
salt & fresh cracked pepper
baguette, sliced (optional, but the crustier, the better)

Directions
Roughly mash one of the cans of garbanzo beans with a potato masher, or a fork, if you’re not in a kitchen with fully-stocked utensils ahem. Combine all the ingredients (except the baguette) in a salad bowl. Toss well. You may have to adjust the seasonings, vinegar, salt and pepper to your liking, but this works for us. Heap spoonfuls of the tuna salad on a sliced baguette, if you’re so inclined. Otherwise, just eat it as is, like we do. It tastes even better if you let it sit overnight, too.

P.S.- In the Fall of 2001, my brother was finally cleared to play halfway through the season of his junior year. In his first varsity start at quarterback, the team got their first win of the year. I, in true form, scrapbooked it.