We have gone from a zone to a man defense in our house. Luca has evened up the playing field with the arrival of his baby sister Alessia Joan on July 2 and now has a permanent partner in crime. 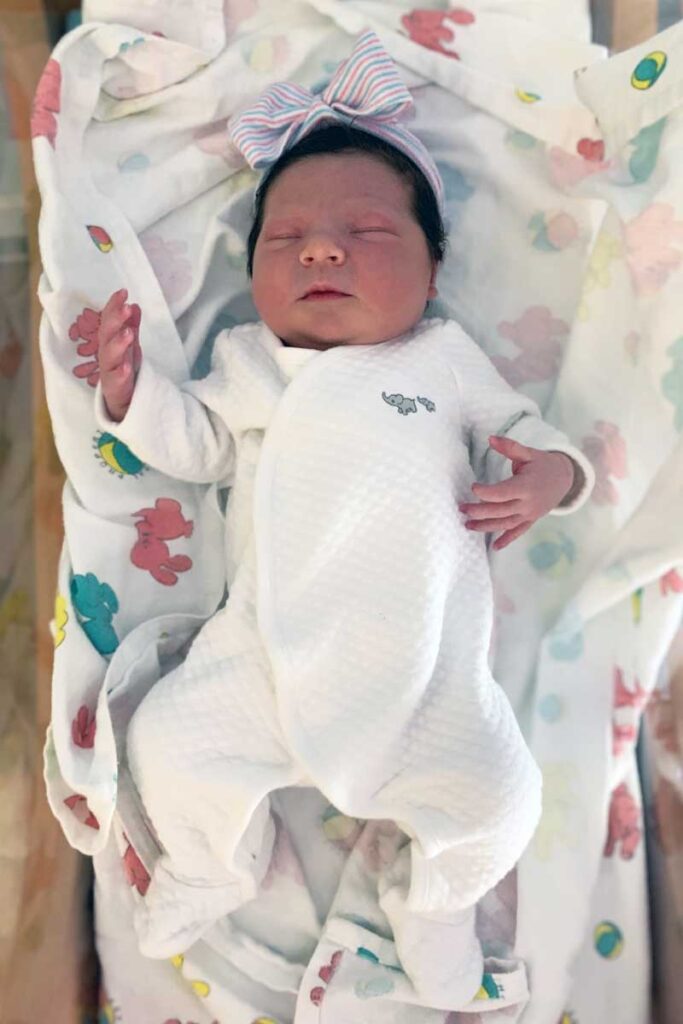 The story of her arrival was definitely different than her brother’s. The first time around, I took my time getting to the hospital, navigating through mild contractions from home. Had it not been raining that night, they probably would’ve sent us home!

With Baby No. 2, things were quite different. I had a few contractions in the morning, but they were irregular and so I figured they were signs of false labor. I was only a day overdue— with Luca I was nearly a week! In the afternoon, I was cleaning up the house and getting ready to hop in the shower when my water broke. I called Dave, then my mom, then the hospital to tell them we were on our way while I got dressed through some contractions, which had started when my water broke. They were still fairly far apart, about 10-12 minutes, so I wasn’t too worried. The nurse on the phone even told me that ‘maybe I should wait an hour’ to see how things progressed. Ha! I tossed around the idea of dropping off an overnight bag for Luca at my parents’ house on the way to the hospital, but ultimately, since it was 2:45pm on a Tuesday afternoon, we opted to go straight to the hospital. If you’ve ever had to sit in traffic on Highway 29, trying to get out of Napa in the afternoon, you know why we made that call (something I don’t think the nurse who told me to wait had experienced, since my explaining it to her seemed to fall on deaf ears… well, you can drive down if you really want to, but we may send you home…” Sigh.)

Long story short, things progressed quickly and we got lucky we didn’t hit too much traffic…though I do recall gritting my teeth through one contraction and telling Dave that I was going to need him to be a “very aggressive driver” for the rest of the ride. We pulled up to the hospital at 3:10pm and Dave quickly flagged down a security guard since there was no “stork” parking. The security guard jumped into action, getting me a wheel chair while Dave got our bag out of the car before handing the keys over to the valet (a super handy service when your contractions are 3 minutes apart).

I should back up a minute because for as long as I have wanted children, the idea of childbirth scared me. That amount of pain (so I’d heard) terrified me. I mean, really scared me. I knew women did it all the time, but I didn’t see myself brave enough to handle that. Gimme the epidural!

I don’t fully recall what transpired next— I remember a buzz of activity as a fleet of nurses started moving swiftly around me, questions being volleyed among the staff. I do remember tears starting to gather in my eyes when the nurses calmly told me, “I don’t think we have time for that,” as they hastily got me into a gown and heard me ask (beg?) for the anesthesiologist. Sheer terror set in and all I could think about was how I hadn’t practiced any breathing techniques to help manage pain.

It was to get an epidural, as I had the first time around and have to be told when I was having a contraction. Maybe this time, I wouldn’t narrowly miss kicking Dave with a reflex as I got it. Then I would welcome my new bundle without feeling like I had just done the splits on a crate of dynamite, (to quote Lorelai Gilmore). I had a plan!

Apparently, Baby Girl had a plan too.

She arrived just 27 minutes later, all 8 pounds, 15 ounces and 21 inches of her, with the most hair I’d ever seen on a baby. Perfect in every way, to quote my Nana.

The funniest part of her arrival was that the poor intake nurse still had to ask me a bunch of questions that had become moot now that the baby was here. My favorite?

Do you have a birth plan?

Yes. This had not been it.

We chose her first name because we liked it. We thought it was pretty and when we saw her, it fit. She received her middle name in honor of my Grandma Joan, who passed away without ever getting to meet any of her great grandchildren. I was close with her and someday, I will share all of those memories with Alessia so she can know who her great grandmother was too.

A Family of Four 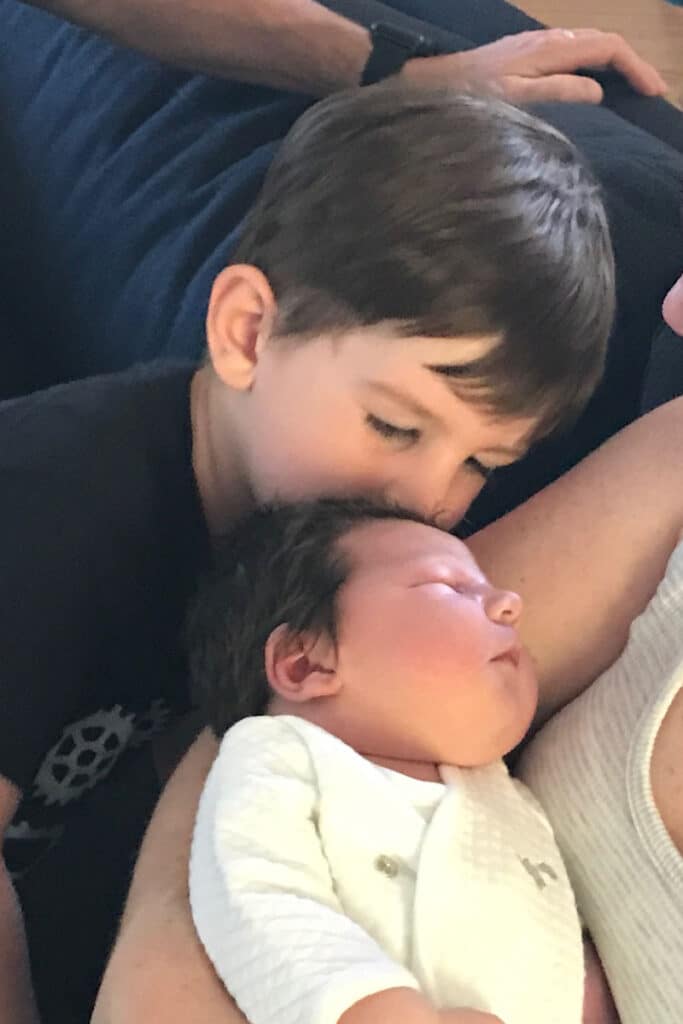 My parents brought Luca to the hospital that evening to meet his new baby sister. My lasting memory will be him seated next to me on the bed as I held his sister, Dave standing over us, and Luca trying to grab for the bulb syringe to put it in his sister’s mouth and ‘help’ her. He’s been an incredible big brother and loves to help his ‘Baby Sister’ (she’s never just Alessia to him), especially if that means giving her a ‘pinky’ (which is funny because we call it a pacifier and not a binky, which he morphed into pinky).

She is a fairly decent sleeper over all. She gives us three- to four-hour stretches at night and that’s only because I usually have to wake her up to eat. I’m pretty sure she’d sleep right through if I didn’t, which really just proves she’s related to me and makes her middle name all the more appropriate (Grandma Joan’s love of sleep is known far and wide). She even sleeps peacefully through the chaos of her big brother dumping out all of his toys and his sound effects of cars zooming through the living room. I can’t wait to see them play together some day.

But I don’t want to wish away this time either. She’s already so much bigger than when we brought her home from the hospital and into 3-month clothing at just five weeks old. For now, I wish she would stay tiny and cuddly so I can hold onto to what it feels like when she nuzzles up under our chins when we hold her. 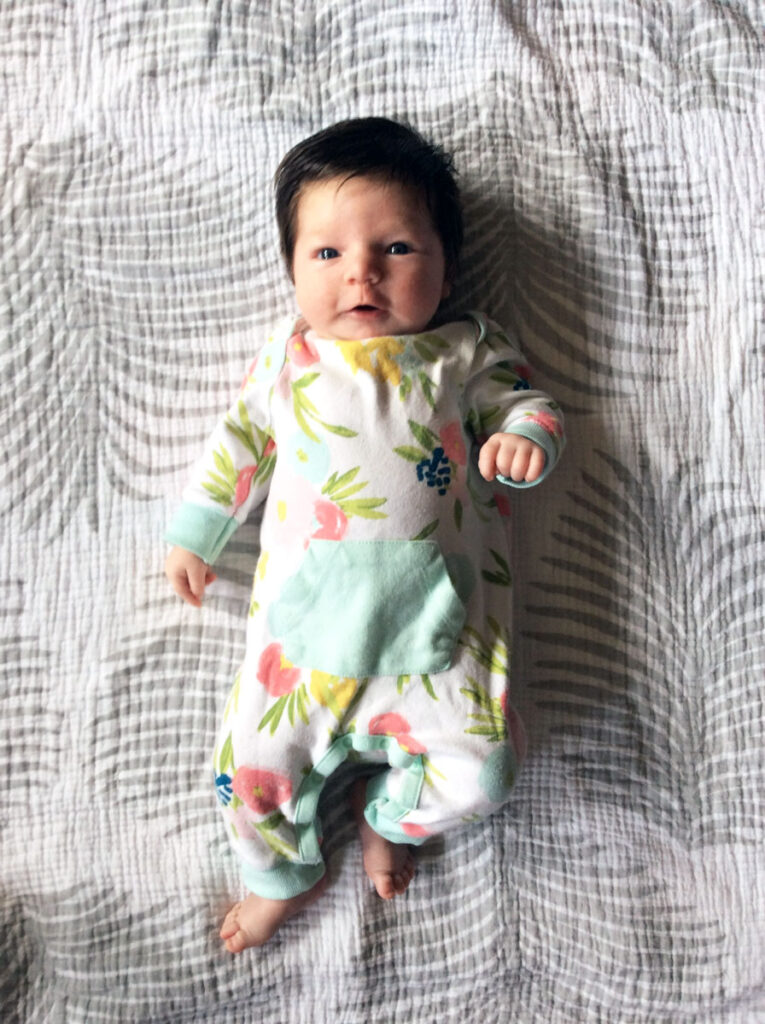 She’s the perfect addition to our family.