My favorite family tradition is Christmas Eve. I don’t think I can remember a time when my parents didn’t host it. It works out super well that my grandmothers were really good friends in high school so all my aunts and uncles grew up together. And since my mom is the oldest of 7 and my dad is the oldest of 6, there are a lot of aunts and uncles. Now that they all have kids, Christmas Eve is the one time when I get to see everyone (for the most part) at once. I love it. I love our full house and the fact that we are so big in numbers that we can’t have a traditional sit down dinner because there are just too darn many of us. I think Christmas Eve is just fabulous. And quite frankly, more fun than Christmas Day.

Christmas Eve is my house also holds a special place because I experienced life without it last year thanksalotDallasairport and I have to tell you. Spending it with my large family is way better than spending it with a drunk girl dressed as a reindeer cursing-sobbing-passed out at the gate.

Anyway, this year, I offered to take on a majority of the food prep off my mother’s hands. It’s a lot of work to clean the house and cook the food, despite edible contributions from all of my family members, and I would rather cook than clean any day of the week.

So on Christmas Eve morning, I woke up and headed to the grocery store. I was cruising through produce by 7:15am. Yikes.

A cartfull later, I was on my way home to prepare the aforementioned groceries. G2 came over around 10 and I made him a breakfast burrito, then quickly began on everything else. There was a lot. Meatballs, homemade hummus, a veggie tray with homemade dip, an antipasto platter with lots of cheeses, meats, olives and the like, a cake, aioli for the crab cakes…I was cooking all.day.long.

I liked it, don’t get me wrong, but holy hell Batman! Christmas Eve is a lot of work! I hopped in the shower at 3:45 and with just an hour to get my hair and makeup done, I pulled the cinnamon coffee cake out of the oven and finished up the baked brie. Then loaded everything in my car. The trunk was full of all of my dishes, dips, veggies and spreads and I drove oh-so-slowly to my parents’ house. I backed into the driveway for easy unloading access and set everything on the neatly designed table my mom had ready. 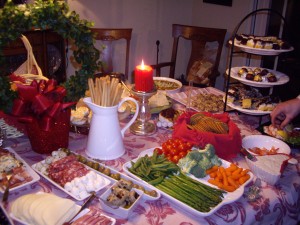 It was crazy. I was exhausted. I had no idea how much work went into Christmas Eve. Seriously. And I don’t even have kids who would need to go to sleep so Santa could come! As in, kids who would be of an excitable age at which they wouldn’t readily fall asleep on Christmas Eve, therefore not allowing Santa to begin putting together their toys, delaying the inevitable sleep for the jolly old soul.

I seriously don’t know how my mother has done it all these years. I’m exhausted again just thinking about it.

On the flip side, I made it into pictures this year, as opposed to last year, when I was trying to see if I could ball myself up small enough to get comfortable enough to sleep in an airport terminal. Woot! Here’s a smattering of photos that will have to do until I can snag the ones my mom took and add them to my shutterfly account. (Click to enlarge.)

CC, me and Megan

My brothers with my grandpa

Kella, me and Katie

Allll the cousins on my mom’s side (minus 2, but plus 2 from my dad's side)

Dawn, Jane and Possum (yep, I have an Uncle Possum)