My struggles with my new oven are well documented. But in my menu planning for the week, I decided to try and embrace my appliance and overcome the love-hate relationship with My Nemesis as my oven will now be referred to going forward.

I “embraced” My Nemesis by including pizza on this week’s menu. Dave and I have made pizza plenty of times and the dough recipe is fairly easy to put together, though it requires a little pre-planning, given the time to let the dough rise. But, it’s perfect for My Nemsis, because when making the pizza, it’s best to get the oven extremely hot (I used to max out my temp at 550) and pre-heat the pan, then pop the pizza in for about 7 minutes or so in that extreme-heated oven. Since My Nemesis has no control over temperature, this would work out just splendidly.

Whilst at my desk, figuring out dinners for the week, I recalled the White Pizza Grilled Cheese Sandwiches we’d had a few weeks ago. While we were 100% sure they were unhealthy, they were 200% delicious. And I’m no math major, but I was willing to overlook those odds in the name of things that taste good.

I figured combining the pizza dough and sanwiches into true pizza-form would be appropriate for a Sunday afternoon cooking/eating project. So this morning, I got the dough ready and after a minor throw-everything-you-just-mixed-in-the-sink-because-all-your-tools-are-in-stupid-metric-measurements-and-therefor-incorrect, I emerged with three dough balls.

Of course, I didn’t take into account the moisture that is ever-present in our flat, so they needed additional flouring throughout the afternoon (which worked out just fine, since I was exhausted from watching the Giants game and may or may not have gotten dressed around 4pm).

This evening, Dave and I assembled our pizza dinner. Now, I had opted against a sauce for this pizza (mostly because I haven’t figured out how to recreate the Whole Foods white pasta sauce with porcini mushrooms that is my normal go-to). Instead, I chose to use the ricotta spread from the sandwich recipe (basically ricotta, minced garlic, chopped basil, oregano, olive oil and salt & pepper). From there, we threw on some mozzarella and goat cheese slices, with some sprinkles of parmesan to top it off.

This was what we were working with: 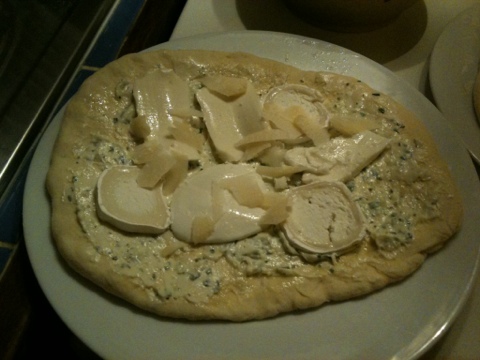 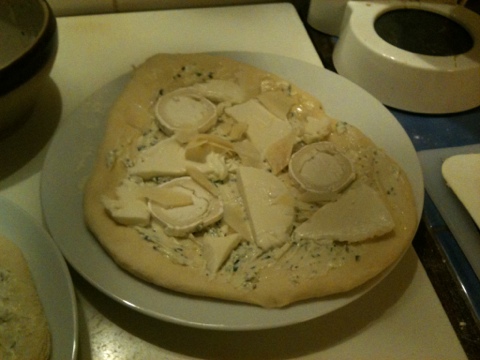 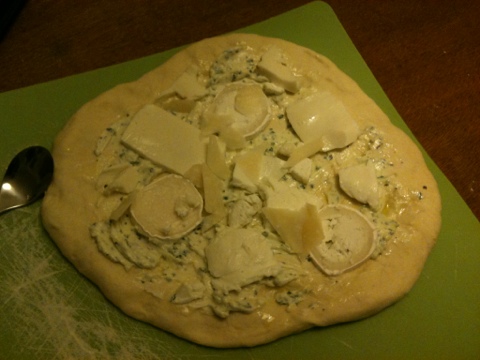 We cooked them individually due to the space constraints of My Nemesis (obviously) and the visual result is below: 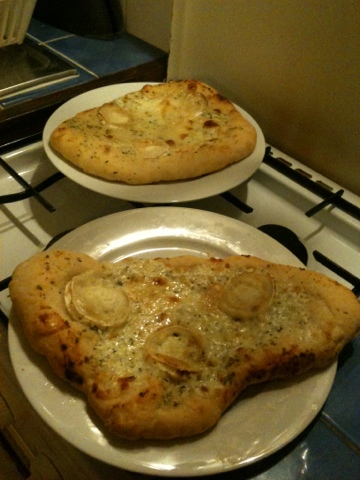 Note that dough ball three is mysteriously not shown.

That is because you know all that moisture in the house? Well if you leave things out on the counter, even on a flour-surfaced cutting board, they still get damp. The flour doesn’t work and they stick to the cutting board and don’t come off except in a blob.

Dough ball 3 is currently in our fridge in “calzone” form.

At any rate, we sat down to enjoy all the cheesy carbaliciousness of dough balls 1 and 2 and soon realized we were just eating cheesy bread for dinner. We literally just had a large-portioned appetizer for a meal. All dinner consisted of was another method by which to eat cheese.

Then I got to thinking about what makes pizza a meal and not an appetizer. The sauce.

Next time we include this menu in our weekly meals, I’m going to have to figure out a solid pizza sauce recipe to include. (Unless a large natural food market based in Texas wants to send me their recipe for white pasta sauce with porcini mushrooms. Are you listening Whole Foods??)

Otherwise, tonight’s recipe was just an edible cheese delivery system enjoyed while basking in my victory over My Nemesis.