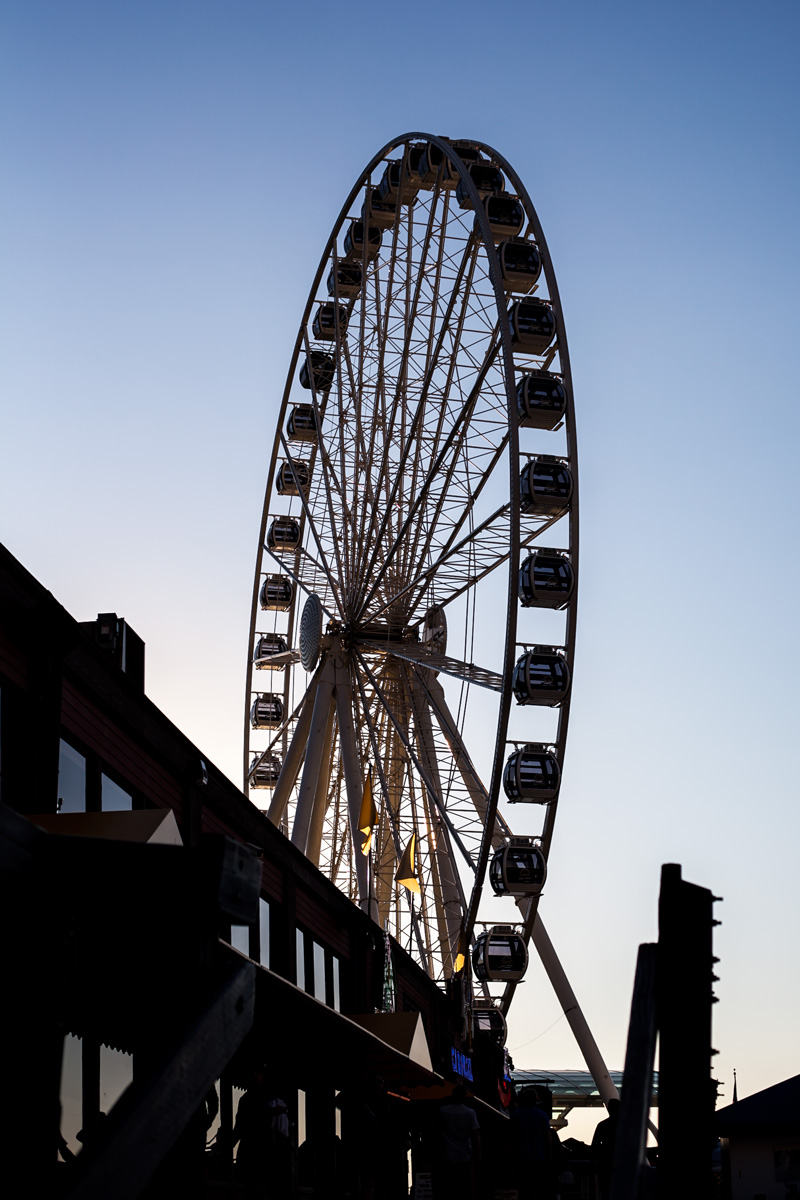 Earlier in October, I flew up to Seattle for a Girls Weekend with my fellow baseball fan Kate, who made the trip from Ohio. Kate and I met in Colorado in 2011, at a Rockies game (naturally) and became fast friends. Since neither of us had been to Safeco Field in Seattle, a weekend focused on food, music and baseball in the Pacific Northwest was in order, especially since it had been over three years since I’d seen her. With a little crafty planning, we hit the last series of the season for the Mariners, as well as a concert with Kate’s favorite band headlining.

There was a visit to Pike Place Market (prepare for lots of colorful food photos and shots of cool neon signs coming soon), obligatory trip to (though not in) the Space Needle, the game (of course), but there was also delightful fall weather (something we had practically forgotten exists here in California), good eats and lots of catching up.

A tip for those who have never visited Seattle before: If you’re lucky enough to visit when the sun is out, I recommend hitting the Sky View Observatory in the afternoon, closer to sundown if you can. This was our first stop after checking into the hotel when we arrived in the late afternoon. We had spectacular weather while there, so the view was pretty awesome. Since admission comes with a reentry stamp, we swung back by to see the sunset, with a visit to Pier 57 in between. The city felt so vibrant with bright signs and the colors of the sun sinking behind the blue-gray mountain ranges. 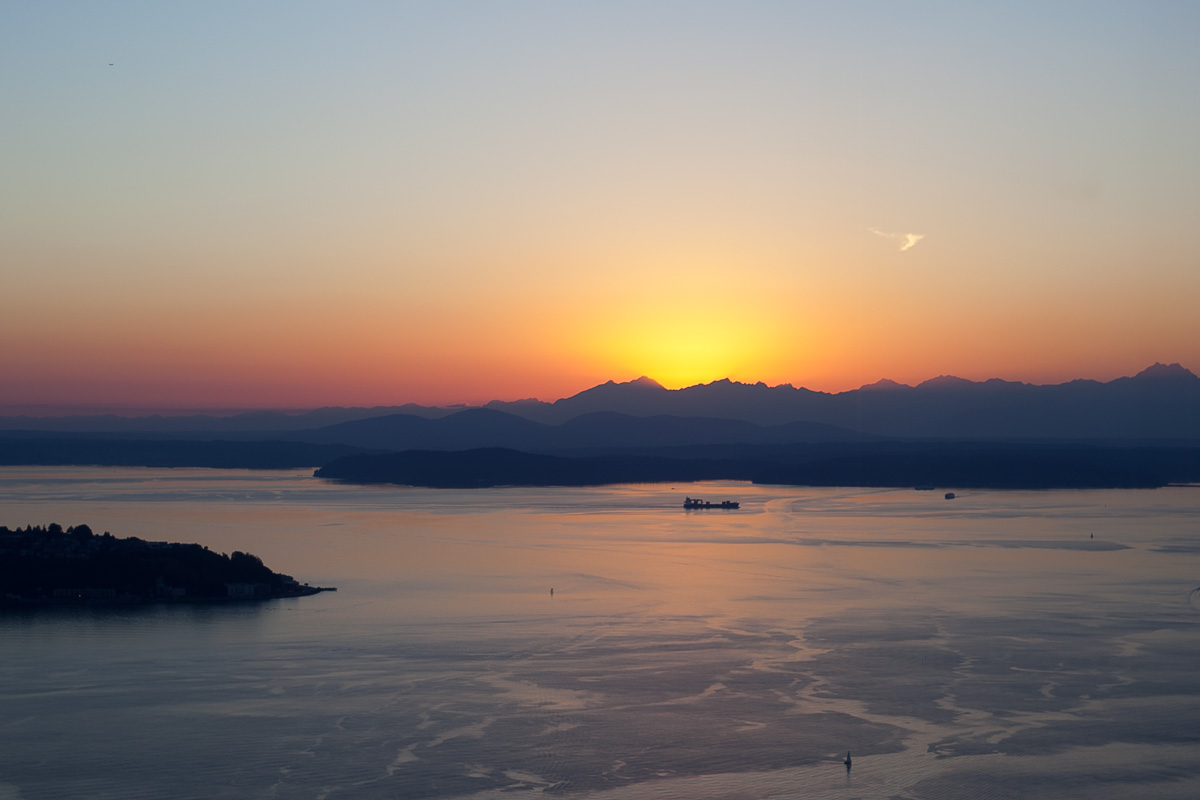 Seattle Sunset // from the Observatory 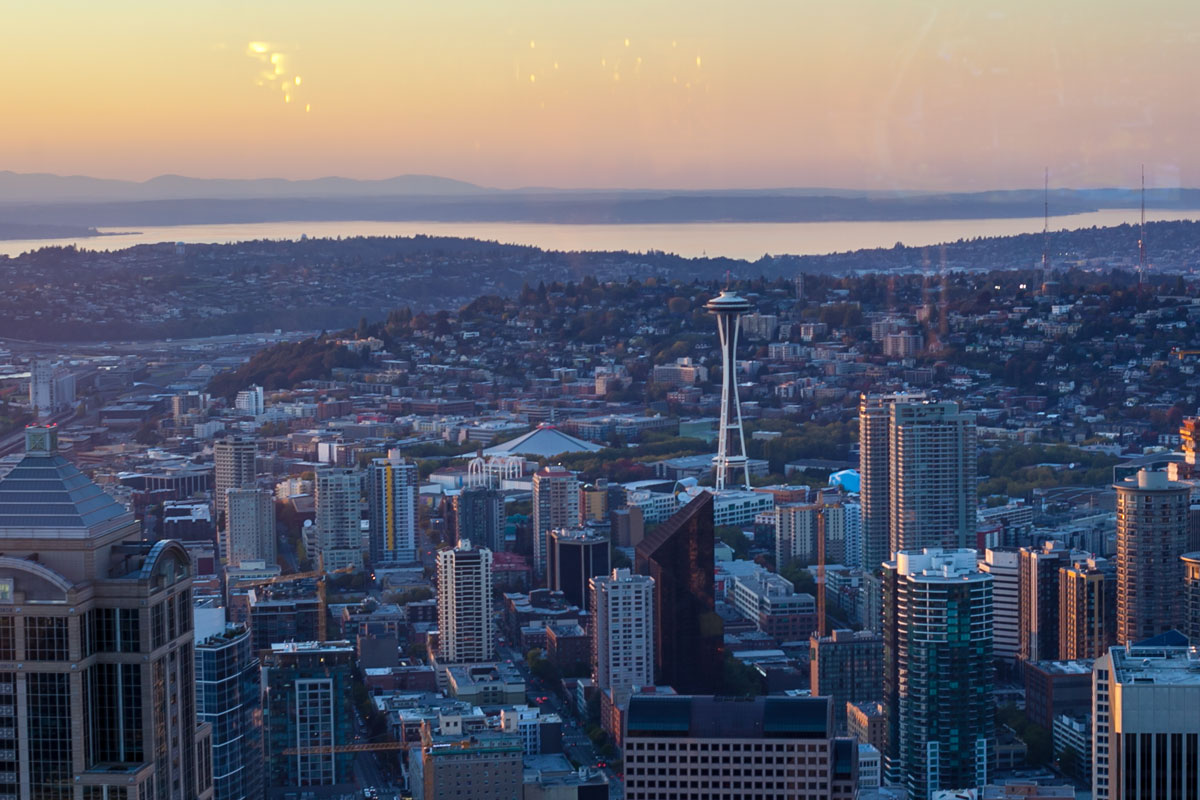 Seattle from above // Sky View Observatory

Friday was gloriously overcast and misty (says the Californian), a day perfect for exploring Pike Place Market. We were up and at ’em early, getting to the market by 7:30am— something I would also recommend. There is something about enjoying a cup of coffee (from the first Starbucks, naturally) without having to elbow your way through a crowd of people that is so much more enjoyable (call me crazy). Trucks were making their deliveries, florists were arranging the day’s bouquets…not only did it give me ample opportunity for photos, but it was so much more relaxing and it really gave me a chance to get a feel for the place. Being there during setup of the day ahead almost felt like a peek behind a curtain; like seeing the inner workings of a little city within, before its people descended upon it (and descend they did— just about two hours later, you couldn’t even approach the front of the market stall where they throw the fish, let alone get a front row view, as we had earlier!) 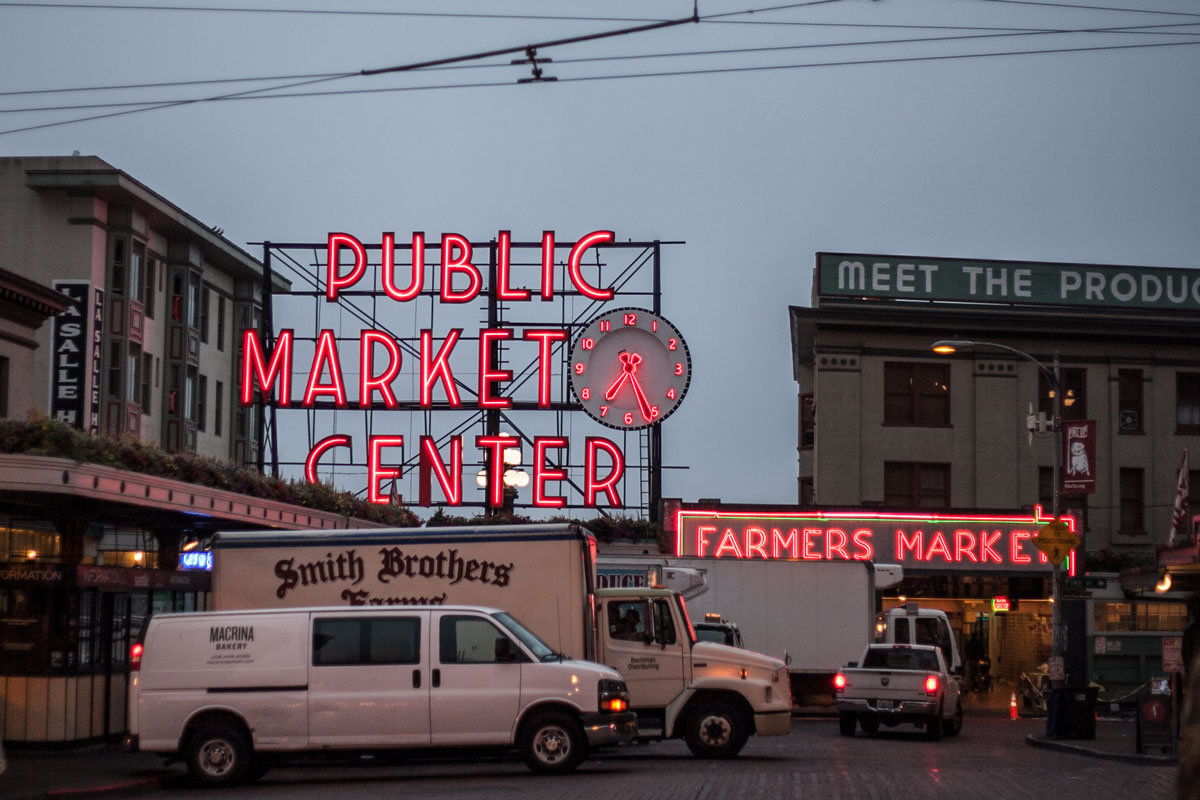 After browsing the market stalls for a while, we walked over to a breakfast place Kate and I had each heard was one of the best in Seattle. With two locations, Biscuit Bitch was a pretty hopping place when we arrived at their Caffe Lieto location. It’s a tiny cafe where you order at the counter and pray that you’re able to shark out a table where you can enjoy a ‘bitchwich’ (their answer to a bacon-egg-cheese on a biscuit) or one of their other “trailer park to table” delicacies. I admit, it was really good, but we couldn’t find a table, so we ventured back towards the market and enjoyed our meal in the public eating area overlooking the water, which worked out fine. We could have hung around the market all day (admittedly, we were already there a long time) but we had a concert that evening and a brunch-induced nap was necessary, but the market experience alone made the day for me.

With tickets to see My Morning Jacket in hand (thanks, Kate!) we roused for an early, pre-concert dinner at Local 360, which was my favorite meal in Seattle. If you are in need of a place to eat/drink, go there. Everything that graced our table was delicious. Even the sourdough toast. It was grilled bread with butter, but it was some of the most delicious bread and butter I’ve ever had (the exception being France; I so miss their baguettes and their tasty French butter. My thighs, however, do not).

Kate is also a great travel companion because she doesn’t mind sharing, which works out well when one of you is craving steak frites with red wine butter sauce and aioli and the other wants the house favorite mac & cheese. We also split some warm apple fritters with vanilla ice cream for dessert and those were perfect! I’m not kidding…one of the best meals I have had in a while and I didn’t even try all of their most-famous, crowd-pleasing dishes.

Saturday was spent shopping and exploring before the Mariners game, which I’ll cover in another post for my Stadium Tours “series” later on, but overall I really loved Seattle. (I did not like taking the first flight out on Sunday morning to meet Dave at the moving truck so we could move into our new apartment, but that too, is another post.)

Seattle has just enough city-feel to resonate with me: not too metropolitan, incredibly walkable (according to Kate’s fitbit, we walked about 10 miles one of the days— which is why I felt zero guilt about stuffing my face with all the deliciousness that was Local 360) and a perfect mix of activity. Combine that with good food, friends and baseball and I’m sold.

8 thoughts on “Girls Weekend in Seattle”